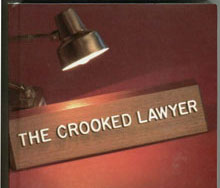 Is Burke a manipulator, schemer, liar and a corrupter? Did Burke engage in ex-parte electronic communications with court officers and a Referee and others? Did Burke willfully and systematically manipulate New York Court Referees and cause and or write illegal Orders to be generated in a scheme to obstruct justice? Did Burke cause a cover-up and engage in fraud to insulate his client, a plastic surgeon?

Did Burke tamper with and willfully defraud and or compromise Unified Court Referee Crespo and Suter? Did Burke and his partner, attorney Kenneth V. Gomez, form an "unholy alliance" with Pavia and his cohorts to tamper with the Unified Court System, its judges and its referees

to disenfranchise Jim out of money, legal rights and access to the Courts? Were Burke, the plastic surgeon, Pavia and his wife Antonia, Gomez, Ikowitz and Helmsley the “GANG OF SEVEN”? Did they conspire to steal, cheat and gag Jim Couri? How has Burke been able to manipulate the justice system in order to sustain fraudulent and concocted counterclaims against Jim with out basis in fact or in law? Why is he allowed to abuse the court system to cover-up his and his doctor client's obstruction of justice, fraud and tampering? Is Burke a "

Past Master" at suborning perjury and covering up his and his clients' abuse of process and attempted acts bordering on extortion? Evidence Now Further points to the fact that Joe Burke's may have forged, tampered with or otherwise falsified a court note of issue and caused it to be filed behind Jim's back. Joe Burke has also recently filed an improper and falsified Verification. Joe Burke has, for over five years, along with his client, proffered claims that are without basis in fact or in law against Jim and that have been perpetuated solely to continue a litigation in a scheme to cause Jim further time and expense. These acts are a ruse to disenfranchise Jim of legitimate, documented and agreed to claims that Jim possesses against Burke's doctor client. When millions are at stake, be careful! More to come, our investigation is active.