Antonia Pavia admits in sworn statements and documents she filed with NYC agencies to her and husband George Pavia's fraud regarding illegal conditions in 18 East 73rd St., NYC and secreted by JSC Joan Madden

We exhibit a letter Jim Couri sent to Chief Judge Joan Carey in 2006, outlining the transparent and despicable acts of George Pavia, Antonia Pavia, and their then lawyers, Itkowitz and Harwood, who quit - and the transparent and suspect acts and manipulations of JSC Joan Madden.

Jim Couri has been the recipient of the Senatorial Medal of Freedom, was on the Presidential and Congressional Business Councils, and was awarded Businessman of Yhe year for two consecutive years. Jim has aided the federal government in tax reformation and law enforcement for over 30 years.

Although Jim Couri produced a Department of Buildings (DOB) certificate of correction, sworn-to by Antonia Pavia, swearing that the greenhouse as part of Jim's apartment in the Pavia building is hazardous and illegally constructed without permits and required approvals and inspections by the DOB. Madden precluded this proof and ignored Jim's evidence and the fact that the Pavias committed fraud and that Jim was partially evicted from a illegal apartment.

JSC Madden further precluded findings by the DOB and the ECB Court that the Pavia's committed rampant perjury and fraud and Madden precluded the findings by ECB Court and five DOB inspectors that the greenhouse and Jim's apartment was illegal and hazardous.

Madden concocted and suppressed the facts to aid fixer Pavias in highway robbery via the Madden kangaroo courtroom and ambush. Take a look at Jim's 2006 letter to Judge Carey posted below. Carey turned a blind eye to the Madden charades and then resigned as a judge . . . stay tuned. 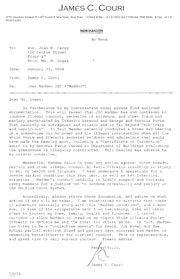