Dr. John Siebert and Diane Kleiman are revealed in detail in devastating public documents docketed in Federal Court Eastern District in Case CV-033829 brought by Kleiman against U.S. Customs and others
Scamraiders has obtained many public documents from the docket and court files assembled in the case that Kleiman brought against the government that she recently caved on and walked away. It appears that Kleiman was revealed as a drug abuser, a perjurer and that her charges and causes of actions, at best, bogus. Scamraiders has obtained a devastating document of statements of facts assembled by U.S. Attorney Leslie Brodsky that denudes Ms. Kleiman along with her background, drug abuses, her antics and drug abuses spawned by Dr. John Siebert and the plastic surgeries that Siebert supposedly performed on Kleiman.

The expose is about 55 pages and Scamraiders intends to publish this important record for all to see----as to how vexatious actions can cause expense and time in defending bogus claims and how an unethical doctor, Siebert, can abuse a mentally fragile patient, Kleiman, to lie and engage in outrageous acts while Siebert was feeding Kleiman unauthorized narcotics feeding her addictions, we assume (based on Kleiman's testimony) to allow Siebert to engage in perverted sex acts with Kleiman and for years at hospitals, including NYU-Langone Hospital, and in Siebert's office. At the same times, Kleiman was being committed for drug abuses and mental disorders by judges, her sister and others.

To be sure, Kleiman was and is mentally imbalanced, based on the evidence foundations in the Brodsky report and that Kleiman was committed to Belleview Hospital in NYC and the Betty Ford Hospital in California for Kleiman's drug abuse and other mental and drug abuse clinics.

Scamraiders’ information and Kleiman’s documents and affidavit points to the fact that Kleiman's drug addiction was spawned by Dr. John Siebert' illegal and perverted acts, including illegally prescribing and feeding Kleiman with bogus prescriptions for contra-indicated narcotics so that Siebert could use Kleiman as his sex-toy and engage in distorted sex acts at NYU-Langone Hospital examining rooms, in-patient hospital rooms and even the plastic-surgery offices at hospitals and even on the phones.

This Kleiman-Siebert--perjury, drug abuse, misuse of the courts, frauds and Kleiman's malicious scheme to try and 'shake-down' the government with lies, frauds and concocted testimony was despicable. The Kleiman Eastern District foray of attempted what looks awfully like 'extortion' at the courthouse by a desperate manipulative liar and drug abuser, who through deception hoped for a unwarranted 'pay-day from the government.

The Kleiman saga reads like an expose of the National Enquirer and a police blotter . . .

This revelation of Kleiman's demented conduct is verified by Kleiman's own words in her own affidavit, her courthouse perjury and the well verified NYU-Langone and Lenox Hill Hospitals firing of Siebert - and now the revealing of the public court files exposing Kleiman's drug abuses and some of Siebert's confirmed sex abuses and other of his shocking activities. The docket in cv-30-3829 is extensive and shocking-

All the while, vulture disgraced Dr. John Siebert used and abused his role as a doctor to further his own sex and narcotics abuses to satisfy Siebert's narcissism and sociopathic, demented activities and indulgences, including literally raping Kleiman while she was drugged by Siebert.

Kleiman admits to the dasdardly acts of Siebert's frauds, including siebert's filing for healthcare recovery by falsification of Kleiman's medical file. The Brodsky report is an unbelievable expose as to the plethora of sick acts, perjury and other wrongful conduct engaged in by Kleiman, Siebert and others. 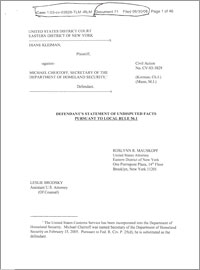