Dr John Siebert defrauds 875 Park Avenue and Brown Harris Stevens, the coop managing agent, sneaks access and subtenancy without any application, credit or background check, and without board approval "slick Johnnie boy" pulls off yet another scam and swindle

Dr John Siebert is a phony defrauding and molesting many, now in order to create a false front of respectability Siebert becomes a 'squatter' in coop 875 Park Avenue.

No applications, no vetting, no credit checks, no background checks, no interviews and behold, slick Johnnie boy is advertising his office at 875 Park Avenue in NYC.

In fact this Dr Siebert is a derelict on the street having been evicted from 3 or 4 other medical offices and having been fired from 3 prominent NYC hospitals for cause.

Slick Johnnie Siebert's fraud on 875 Park Avenue by gaining occupancy under the radar with the help of tenant Jelks is a fraud on the board of 875 Park Avenue and Brown Harris Stevens and its owners Bill and Arthur Zeckendorf and Kent Swig.

Making matters more murky is the roll of Brown Harris who, on a brief interview on 2711 with Donald Levy property manager of 875 who stated that he never heard of Dr John Siebert.

Yet slick Johnnie is enjoying his illegal occupancy at 875 Park Ave and the internet records reveal that Brown Harris Stevens on 2211 were active on Scamraiders sites for 59 minutes carefully reviewing over 15 articles and evidence of Dr Siebert's sex abuses of patients, his being evicted and fired and Sieberts sordid trail of healthcare frauds and molesting of patients and the affidavits, etc in the victims own hands.

Thus Brown Harris seems to have known about Siebert and his illegal occupancy of 875 Park but oddly investigated Siebert on the internet and did nothing to report Siebert's squatter status at 875 Park Avenue.

Seems that the 875 board have been left in the dark about a sex vulture and swindler/rogue doctor illegally occupying coop medical office in their building are Brown Harris negligent or who knows?

Brown Harris, it's time to fess up and report how this Siebert scam has occurred. What about the safety of 875 owners?

Scamraiders, as a internet news organization and a website targeting scams, corruption, swindles etc per its published Terms of Use and Mission Statement, wishes to know why? Is Brown Harris Stevens hiding something, thus imperiling other prospective Siebert victim/patients?

Why were Levy and Herman of Brown Harris less than candid about a clear and convincing scam of illegal occupancy in a coop NYC building and under the radar?

Possibly Scamraiders can get a more direct response from Mrs Swig and the Zeckendorfs' who bought Brown Harris from Helmsley to retain the long history of the company not to condone squatters by a documented sex vulture and thief.

This is sad for the board and the owners of coops at this fine building.

Brown Harris, Scamraiders wrote to you by email for your comments or denials directed to mgr Paul Herman who hung up on Scamraiders' reporter. Why? We are only seeking the truth and the protection of citizens.

Does 875 Park permit sex offenders and thieves into its building?

Surely the 875 board is in the dark on this scam of Dr Siebert and Dr Jelks?

Siebert is not a employee of Jelks.

Siebert runs his own practice and is a proved undesirable character. What's he doing in occupation of medical space at 875 Park Ave?

See below for more info on Brown Harris Stevens 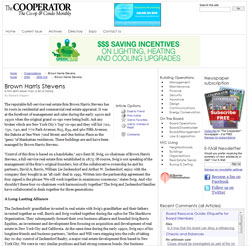