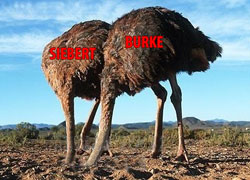 Joe Burke, Esq. continues to try and con the NY courts and cover-up his intentional and corrupt violations of a injunction barring motions and other legal actions without first obtaining permission by conference call with all parties on the line with the presiding judge.

Burke and Siebert engaged in a scheme to obstruct justice, defraud the courts, defraud Jim Couri in a plot to rob Jim's documented claims against Siebert for $20 million in agreed-to notes and other obligations. Burke and Siebert defrauded the courts and the Appellate Division 1st Dept by secretion the injunction and engaging in rampant perjury. Such acts are crimes and contempt of court. Meanwhile, JSC Paul Wooten knowing that the injunction has been violated and mandated to reverse and set aside all decisions generated by any judge who was conned and deceived by Siebert and Burke by not disclosing the injunction has allowed these motions made by Jim Couri who is ill, languish since Sept. 2010.

We understand that Wooten engaged in lies and deception over interstate phone lines at a formal court hearing and then the transcript of the hearing was tampered with as recordings prove the Wooten attempted railroading of Jim Couri, lies and deceptions. Meanwhile, Judge Wooten has failed to vacate the documented fraudulent decisions rendered in violation of the injunction, failed to recuse himself for cause and failed to answer for his interstate deceptions and frauds over phone lines in a court proceeding.

Meanwhile, Jim Couri is very ill and his legal rights are butchered by documentary proof of Siebert and Joe Burke's fraud on the courts, corruption and collusion.

Will the real ostrich please get his head out of the sand and stand up?

We at Scamraiders and scams inc are alarmed at the forgoing outline of corruption in the NY courthouse and failure to take action against Siebert and Joe Burke for secreting a injunction and causing judges to be deceived by generating decisions in violation of the injunction all mandated to be reversed and set aside.

JSC Wooten knows this yet he sits on his hands and tries to railroad pro se sick Jim Couri by a interstate despicable scam confirmed by documentary proof. Although Jim Couri is ill we are wondering why Siebert and Burke's actions are not deemed crimes, contempt of court and why they are not made accountable for their frauds on the courts and on Jim Couri and why JSC Wooten does not answer to his attempted sand-bag of Jim over interstate phone lines in a court proceeding?

Such acts by a presiding judge we hear is a attempted fraud on a litigant over interstate phone lines and may constitute federal infractions and a railroading by a presiding judge to deprive a litigant with justice and fair play and ignoring John Siebert and Joseph M. Burke, Esq's rampant violations of Judiciary Law 487 and disciplinary rules, CPLR and penal codes, etc.

It sure looks bad for Judge Wooten and more than suspect that Wooten has repeatedly condoned and turned a blind eye to Siebert and burks well documented perjury, obstruction of justice, fraud on the court and contempt and fails to decide the motions that prove Siebert's and Burke's criminal acts and corruption further confirmed by the public revelations that Siebert is a thief, a sex predator ans a insurance thief who has been fired by three NY hospitals for sex abuses and evicted out of four medical offices for fraud, deception and issuing bum checks.