How many people did George and Antonia Pavia bribe in order to avoid rent stabilization at their 18 East 73 Street brownstone? And in the process rob tenants and obstruct justice-engage in Rico crimes and federal crimes of collusion, corruption and fraud via interstate instrumentality?

The Pavias have danced and now comes time for them to pay the fiddler, George Pavia engaged in rampant fraud and deception at the DHCR, filing doctored documents and perjured affidavits himself and his jailhouse pal mob contractor Ted Kohl. Pavia lost at DHCR, lost before JSC Lebedeff, lost at the app div as the DHCR prevailed and found his property to be rent stabilized, rabid with anger and above the objections of his then lawyers Pavia hired Jay Itkowtiz, who admitted that Pavias 'will do anything to get Couri out.' Then the Rico collusion began, Scamraiders has put the Pavia 'gamesmanship' frauds together of corruption bribery, forgery, perjury and railroading. The Pavias compromised the Madden court and the documents and paper trail establishes that the Pavias not only corrupted Madden's court but then out of desperation and spite corrupted others. Scamraiders will be exposing the greed, larceny and ambushes of the Pavias who have violated a myriad of federal statutes in their robbery of due process and the rules of law. Stay tuned to Scamraiders for more on the corrupt George and Antonia Pavia.

George and Antonia Pavia have been repeatedly asked by Scamraiders to deny the proofs and exposes reported on our sites. The Pavias have failed to deny any of the charges, rather they have hired thugs to intimidate, harass, threaten and extort us. See Scamraiders open letter, one of many Scamraiders has posted inviting the Pavias and others in concert with them to stop the threats, harassment and extortion and admit or deny with proofs, their wrongdoings. As the evidence does not lie and the Pavias have violated the law, engaged in Rico-corruption and collusion and tax evasion.

See Scamraiders and archives for more on the Pavias corruption. 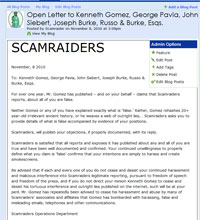