Is a major New York hospital involved in a scheme and coverup of systematic and deliberate healthcare fraud?

Why is NYU/Langone hospital stonewalling and covering up the reported intentional, unlawful and repetitive healthcare fraud orchestrated by Dr John Siebert? while Siebert was on the NYU/faculty and staff.

In the process Siebert's frauds, according to Kleiman, robbed empire for over $500,000 for the benefit of Siebert and Siebert's healthcare fraud as to the Kleiman scam also appears to have unjustly enriched NYU Langone for $700,000. Thanks to Siebert's healthcare misrepresentations, false claims, and intentional deception.

Does a hospital not know what a patient is being cared for while a inpatient? Particularly a patient such as ms Kleiman who swears that she was a inpatient at NYU for over two months total?

Was NYU defrauded by Siebert? What did NYU know and when? If Kleiman's swornto affidavit is accurate and it was confirmed by empire Siebert surely must be prosecuted for intentional healthcare fraud and NYU you must either admit or deny the Kleiman affidavit as it relates to NYU. A fine institution's reputation (IE: NYU) is at stake for a lying thief rogue sex abuser Dr John Siebert.

Or were NYU's staff complicit and turned a blind eye in order that NYU receive a fortune in Siebert's bogus and unauthorized healthcare benefits through Siebert's deceptive and unlawful means?

NYU refuses to reveal the facts as to the Kleiman swornto testimony swearing that Siebert and NYU were unjustly enriched by Siebert's purposely filed fraudulent claims and misrepresentation of Kleiman's conditions.

What did NYU know or should have known about Siebert's falsifications of records and false claims involving Kleiman and probably many others that Siebert deliberately filed bogus claims to empire and others for gaining unauthorized benefits through fraud.

Why is NYU not coming clean and making public the Siebert scam and the findings at the Siebert/Kleiman and other hearings? Kleiman opened this can of worms and herself waved all confidentially issues on her case.

NYU is not stupid, why did they turn their back on Siebert's healthcare frauds and thus according to Kleiman enjoyed a fortune in unjust financial benefits from Siebert's frauds at the expense of empire and the public.

Siebert is a thief and NYU may know and is hiding how many other patients of Siebert's were victimized by Siebert's deceptions resulting in Siebert and NYU receiving a fortune in bogus healthcare benefits through fraud and misrepresentations ripoff of healthcare providers?

Siebert's office manager Nelsa Garcia filed all claims in concert with Siebert. Scamraiders understands that Garcia, Siebert's 'partner in crime' has all of the proof of the many of Siebert's healthcare frauds.

What does NYU know and why are they not airing out this Siebert scam?

Kleiman pulled the 'cat out of the bag' NYU your refusal to 'come clean' on Siebert and the 'hearings' looks poorly for a fine hospital who fired Siebert for cause NYU can not protect Dr. Siebert a sex abuser and a healthcare swindler.

For the record, Scamraiders will post on the homepage on Jan. 24, 2011, an unanswered letter to NYU/Langone's chief lawyer, Annette Johnson Esq, emailed by Scamraiders operations department on Jan. 20, 2011

You the public read the unanswered email and you decide if NYU is covering up and stonewalling Siebert's healthcare frauds which are federal crimes. 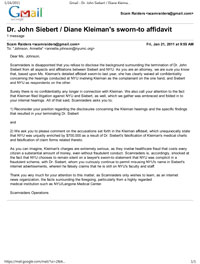