Is George M Pavia and his wife Antonia Pavia fraudsters, tax evaders, corrupters of courts and judges and perjurers or are they just misunderstood and honorable NY citizens? 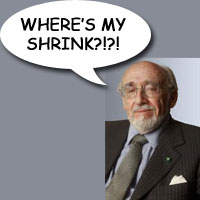 How can this dilemma be resolved?

The Pavias are a curious couple. They try to create an image of surface 'sweet talk' and affectations, but do not be deluded, George m. Pavia's acts and reported neurosis establish that he is a self styled autocrat, bully, and a trickster.

Scamraiders has also learned that George Pavia was (for about 20 years) under the care of mental doctor Arnold Hutschnecker who we are advised diagnosed George with having delusions of grandeur and sociopathic conduct and numerous 'other' complexes. Hutschnecker was also the 'shrink' for Richard Nixon for a period.

We have been told by persons who knew Hutschnecker that George always had a problem and neurosis with his appearance, much like as Dr Hutschnecker put it 'a chimpanzee/type look-a-like' sadly the doctor revealed that George blames everyone for his deficiencies and wants to and does engage in revenge on all who have figured out his cloak and false facade and who have stood up to George's intimidation and abusive conduct.

It seems that it must be 'George's way or else.'

Shrink Hutschnecker outlined before his death that George is a vicious and spiteful scallywag and scoundrel who will take vengeance by thefts, intimidation and deception and worse.

George, we are advised by court papers, even tried rob and rook his first wife Ellen Solomon's estate and rook her rent stabilized apartment in NYC.

Many interviewed who had interaction with Mr Pavia think that George is a deranged man with patterns of grandiose conduct similar to that of Capt. Queeg in the film The Caine Mutiny, well enough said for now.

We refer you to much more about the Pavias in detail in Scamraiders archived articles and documents, interestingly all undenied by Pavia or his thugs.

You will see what others and the ECB court, the DHCR and the Dept of buildings say about the Pavias and their forgery, retaliations and bribery, tax fraud, perjury, and the NYC ECB court finding three times at separate hearings that the Pavia's are perjurers, and how these Pavias stole rent stabilization by obstruction of justice, tampering, collusion and worse

The Pavias are now snug as bugs in a rug in their stolen property faking and rooking their way to their own self styled nirvana created by fraud and corruption.

But nothing, per the shrink, will rectify George's mental disorders exacerbated when George looks in his mirror.

Possibly that is why George has a long beard, he possibly hates himself and thus despises looking at himself in a mirror as other see him so says Dr Hutschnecker we are told by reliable sources.

And as we are told Dr Hutschnecker put it' George Pavia is a lecherous, distorted looking and emotionally angry person frustrated by rejections, thus a mentally distorted, vicious, hateful and contorted person.

Dr Hutschnecker further reported that George is riddled with inferiority complexes and who is suffering with compensating needs to abuse, take advantage and manipulate others by these and other vengeful and dastardly acts perpetrated by George Pavia in order to shroud Mr. Pavia's, spiteful, and inferiority complexes.'

We learned that George Pavia was in mental and medical therapy with his 'shrink' Dr Hutschnecker for many years spanning from about the early 1960's to the mid 1980's.

Scamraiders investigations, reports from his 'shrink' Hutschnecker and other interactions, etc. regretfully reveal that George Pavia appears to be a wicked self indulgent and Machiavellian person who has repeatedly displayed his belief that he and wife Antonia are above the law and that they can get away with fraud, deception, intimidation, corruption,perjury and worse to satiate his unjust self enrichment.

Possibly George Pavia this time may have bet wrong and finally after years of his machinations will be exposed and caught and this time with his hands in the cookie jar? Time will tell.

Please note as always Scamraiders welcomes any denials by George and Antonia Pavia of the reports in this article which will be posted along with Scamraiders replies to date none of the articles and exposes of the Pavia's have been denied and Scamraiders has produced evidence of its reports regarding the Pavia's acts, see Scamraiders 'terms of use' and 'mission statement.'

The Pavias and in particular George have instead caused their hired hooligans and thugs to intimidate, extort, threaten and abuse Scamraiders and its staff and its present and former affiliates.

But no denials from the Pavias in fact bully George himself has rather threatened and used bodily harm in the presence of 4 witnesses, intimidation by George of freedom of press and free speech.

George has no problem engaging in abuse and mafia style threats, assaults and intimidation

George has seemingly deluded himself that he is above the rules of law in his murky world of greed and larceny.

George Pavia's acts seem to confirm Dr Hutschnecker's findings as to George and his vicious and vengeful mental deficiencies and disorders.

See more on Hutschnecker/Nixon, etc and on Pavia:

A. Hutschnecker; Served as 'Shrink' to Richard Nixon