Jim Couri advises Scamraiders that, although he is ill and convalescing, he was compelled to file, on Jan 20,2010, a motion in Couri v. Siebert, et al, Index 10724/04 and companion cases seeking the removal of JSC MIchael Stallman and a full expose and hearing into the fruad, collusion, spoliation, and bribery perpetuated by John Siebert, M.D., Joe Burke, Esq., Russo & Burke, Kenneth Gomez, Esq. and George Pavia, Esq.

Scamraiders has obtained this motion, without exhibits, which is available to all of you here to read. Jim advises that Judge Stallman has, coincidentally, been removed from all aspects of these cases, effective immediately.

Jim contends, and the evidence appears to establish, that these named persons have misused the New York Courts, engaged in collusion and corruption, and attempted theft of Jim Couri's documented and admitted to 20+ million dollars owed to him by Siebert and his PC.

Interestingly, all of these obligations entered into by Siebert and due to Jim are memorialized by numerous promisary notes, settlement agreements and general releases in Jim and his affiliate's favor, not only executed by Siebert and his PC, but prepared by Siebert and/or his lawyers. 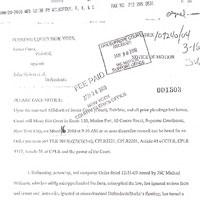