Sicko John Siebert Md a proven thief, sex rapist and crook, continues to lie on his web-page. Siebert claims he is on the 'best doctor list', except he fails to reveal that his medical license is in peril to be terminated for his sexually raping and abusing dozens of patients and for his being charged as a pedophile. Notice that Siebert's partner in crime 'office manager' Nelsa Garcia is mentioned to call for more info. About 'quick-draw Johnnie', Nelsa is the one who writes up the fraudulent insurance forms for Sieber's thefts of insurers proceeds according to victim patient Diane Kleiman, who Siebert sexually molested and repeatedly raped and fed narcotics to -some fine doctor?- Siebert is a sociopath pig and vulture.
Now Siebert in his desperation to lure more victims into his rape-den, lies on his site claiming that he is on the faculty of Langone/NYU Hospital the truth is this bum was fired for cause and removed from Langone/NYU long ago for sexual abuses of patients, often on the premises of the Langone/NYU Hospital. Siebert is now, after being evicted by Dr. Dan Baker and previously by Chase Bank and Dr. Sherill Aston, working for 'Jelks Medical Office'. Nomad Siebert may soon be working in the medical office of Danbury Prison or maybe Sing Sing. Scamraiders will continue to assemble the evidence of this sex vulture's crimes and report them to the public 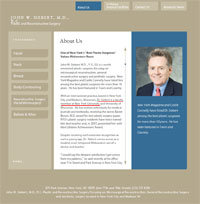 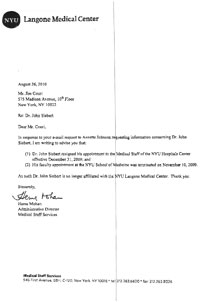 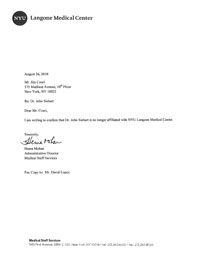