JOHN SIEBERT MD----A FRAUDSTER WITHOUT CONSCIENCE OR INTEGRITY? HERE ARE THE FACTS -- YOU DECIDE

Are John Siebert MD and his PC (Siebert) and his current lawyer Joe Burke Esq. now proven tax evaders, swindlers, and sociopaths? Any doubts? -- Review Scamraiders Court Archives and Exhibits. It appears Siebert is, plainly put---a fraud and a liar. To follow here is further documentary evidence exposing the perjury, suborning of perjury and fraud on the Unified Courts in New York and on Jim Couri (Couri), engaged in by Siebert and his lawyers Russo & Burke and Joe Burke Esqs. (Burke).

DECEMBER 19, 2002 AGREEMENT BETWEEN COURI AND SIEBERT 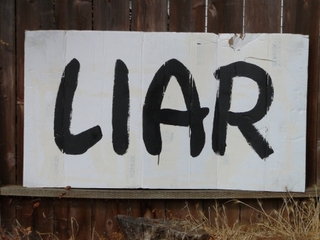 In December 2002 Siebert’s lawyers Gilbride, Tusa, Last & Spellane, Esqs., (GTLS), negotiated and prepared a Promissory Note and Settlement Agreement (Agreement), between/among Siebert and Couri, and Couri’s Affiliates. (This entire Agreement and the Note are an exhibit here) The 12-19-02 Agreement states, inter alia, that the Parties wish to settle claims Couri has against Siebert for--- Guarantees, Agreements, etc. See page 1 of Agreement. As set forth in the Agreement, page 2, Siebert agreed to timely pay Couri et al $1,400,000.00, plus interest. The Agreement signed by Siebert and Couri on December 19, 2002 specifically states on page 3:

“with respect to any action brought to collect the amount due
under the Note, Siebert and PC agree not to assert against Couri,
any defense, set-off or counterclaim which they may have,
including without limitation any defense based on the statute
of limitations, laches, waver or estoppel. Siebert and PC
hereby wave any right to a trial by jury in any action or proceeding
related to this Agreement and or Note.”
(Paragraph 12 of the Note recites the same conditions)

SIEBERT DEFAULTS
Siebert soon thereafter defaults in payments of the Promissory Note dated Dec. 19, 2002 (hereto) and defaults on other conditions of the Note and the Settlement Agreement with Couri, including violating restrictions of a entry of a Judgment against Siebert. See page 5 of the Agreement and page 2 of the Note ‘Events of Default’, which state:

“Entry of any Judgment in any State or Federal Court
against Siebert or PC constitutes a default under the
Settlement Agreement.”

Siebert and PC defaulted on Promissory Notes Siebert owed to Richard Jacobs. Siebert became a Judgment Debtor in favor of Jacobs for approximately $450,000.00 in a defaulted Note for ‘loans’ that Siebert failed to pay to Mr. Jacobs. Thus this Jacob Judgment against Siebert constituted a default under the Couri/Siebert Settlement Agreement and Promissory Note of 12-19-02. Siebert also failed to properly and timely pay the Promissory Note due to Couri pursuant to the December 19, 2002 Settlement Agreement. See Note, hereto.

SIEBERT ENTERS INTO ANOTHER AGREEMENT DATED
OCTOBER 8, 2003 WITH JIM COURI AND DEFAULTS AGAIN 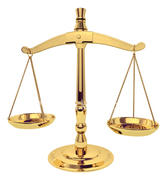 Subsequent to Siebert’s default of the Dec. 19, 2002 Settlement Agreement and to allegedly avoid litigation with Couri-- Siebert negotiated and signed the Agreement of October 8, 2003 and Release (Exhibited here). This Agreement, contrary to Siebert and his slick lawyer Joe Burke’s misrepresentations, was made a part of about ten Pleadings by Couri in the litigation and was made a part of Siebert and Burke’s 2007 bogus Appeal Record.

SIEBERT’S PERJURED AFFIDAVIT
When Jim Couri commenced legal action under the October 8, 2003 Agreement, Siebert in an Affidavit, ‘Sworn to’ on April 28, 2008, under penalty of perjury, Notarized by Joe Burke, asserts a series of concocted statements as ‘defenses’ (See Siebert Affidavit). It appears this Affidavit further confirms that both Siebert and Burke are fraudsters, perjurers, and are willing to do say anything to avoid paying agreed-to obligations. Here are the evidentiary facts extracted out of Siebert’s Affidavit signed by him and created by Burke for Siebert; belatedly Siebert claims:

“I did not sign the October 8, 2003 Agreement”---
“I have never signed any such Agreement or Release.” ---
“I paid plaintiff in excess of $7.8 million in connection
with his scam venture.”

A) Independent Notary, Gloria Rivera, in her Affidavit dated March 10, 2008, confirms that she witnessed Siebert (who she knows) sign the Oct. 8, 2003 Agreement and Release, and further confirms that Siebert swore to the contents of the Agreement and Release in her presence on October 8, 2003. Notary Rivera swears that the Documents are genuine and duly executed by none other than Siebert and his PC.

B) Siebert never paid Jim Couri anything. Siebert never had $7 million; and Siebert was for seven years, a Director and Corporate Secretary of the very business he now refers to as “a scam”.

C) Seemingly Siebert speaks with a forked tongue. He admits out of his own mouth in his Affidavit that he “guaranteed” under the Feb. 22, 1999 Agreement and Consulting Agreement, to make all of his and PC agreed-to payments as called for in those Documents, (both Documents are in evidence and signed by Siebert). How then can Siebert say that he would “never agree” to these terms? HE DID, willingly, plain and simple. Siebert thereafter, failed to pay, ‘renegotiated’ and defaulted again under the Settlement Agreement of Dec. 19, 2002. Siebert in fact defaulted three times. Clearly, Siebert says and does anything to avoid his obligations. Siebert apparently believes that he could keep defaulting and not be required to pay his obligations.

Siebert in his April 28, 2008 Affidavit then swears:
“When plaintiff filed this action (#107240/04) in June 2004,
I filed counterclaims seeking return to me the $7 million
I paid to him from 1996 to 2003. If I had signed any
Agreement in which I agreed to wave any defense or
Counterclaim plaintiff would have brought forth the
Oct. 8, 2003 Agreement--- file a motion to dismiss the
counterclaims based on the Agreement. Plaintiff did not do so.
Similarly, if I had signed a Release on October 8, 2003,
plaintiff would have asserted the Release to bar my Counterclaims.”

D) Siebert signed not one, but three Releases (see: General Releases hereto executed in Couri’s favor and signed by Siebert in years 2000, 2002, 2003). Thus the Releases ALL bar Siebert’s bogus counterclaims. More interestingly, Siebert and Burke seem to have forgotten that Siebert signed (and never refuted) the December 19, 2002 Settlement Agreement prepared by Siebert’s own Lawyers, GTLS, which clearly, intentionally and unambiguously waves any rights by Siebert to assert counterclaims, etc. It is clear that Siebert has committed perjury in his Affidavit of April 28, 2008. See also: December 19, 2002 Settlement Agreement, page 3, hereto: and see Notary Rivera’s Affidavit. Motions have been made by Couri seeking Dismissal of Siebert’s barred counterclaims and are before this Court, based upon General Releases and the Dec. 19, 2002 Settlement Agreement where Siebert waved counterclaims and defenses with his lawyers advice. Siebert/Burke now cannot rewrite history.

As can be seen, Siebert and Joe Burke have no problem engaging in fraud, perjury and obstruction of justice. The Documents exhibited here point to Siebert as a perjurer who in concert with Lawyer Burke has perpetuated a fraud on these Courts and Couri long enough. The proof of a scheme by Siebert/Burke to obstruct justice for unjust enrichment is can be easily seen through the paper trail of documentary evidence. These appear to be willful and criminal acts made with intent to defraud and to steal Jim Couri’s agreed-to entitlements. The rest of the Siebert Affidavit of April 2008 seems to be a continuation of a smokescreen. Jim Couri, though he is fighting cancer, appears to be standing up for his rights and the money due to him; while Siebert and Burke continue to con the Court. Furthermore, because Couri is owed a substantial sum ($20million) from these swindler/perjurers, Jim is being harassed and extorted by Siebert’s hired-thug, Kenneth Gomez, and Siebert himself. 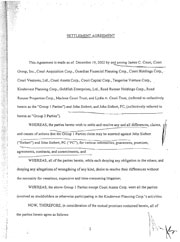 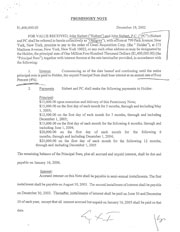 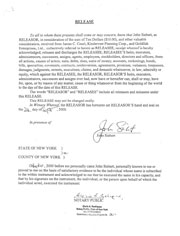 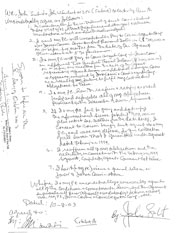 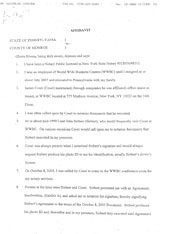 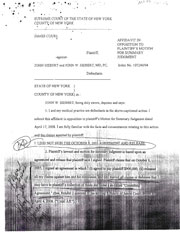