MORE ON THE CURIOSITIES ONGOING AT THE NEW YORK SUPREME COURT ?????
Favoritism? Bias? Misapprehension? Fraud? Or something else? 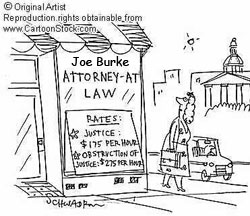 Why is the New York Supreme Court ‘turning a blind eye’ on what looks a lot like perjury, tampering, fraud, and suppression of material evidence? Why are these Courts allowing Joseph M. Burke Esq. to proffer claims and causes of actions that appear to be outright fraud, without any documentary foundation or legal basis, that are perpetuated only to abuse, harass and ‘extort’? All of this has become more than very disquieting. What is the Court’s agenda? Why are Mr. Burke and his Clients permitted to continue these corrupt acts ongoing for five years in these New York Courts?

The Court has also curiously condoned unauthorized private communications between Court Referees, including but not limited to special referee Jack D. Suter, and Joe Burke, a lawyer, and permitted this lawyer to literally write Court Orders himself, in exactly his own words and then implemented by the Court at least twice. Though these improper acts were fully documented for the Court to see, they ‘put their head in the sand’, and as a result

facilitated in disenfranchising due process; thusly promoting rather than stopping Mr. Burke’s rampant abuses of Court Rules. This improper activity, as well as Mr. Burke’s memorialized tampering with documents and Court filings, in addition to his perpetuating other ‘sharp practices’ too numerous to list, gives rise to grave concern and alarm. It seems that Attorneys Russo & Burke and Joseph M. Burke have engaged in these disingenuous, unethical practices and corrupt acts, and continue to do so, as yet without any Judicial reprisal. Are Mr. Burke’s actions an obvious scheme to attempt to cover up his Clients’ tax evasion, breaches of Agreements, and defaulted obligations exceeding $20,000,000.00? Why is Supreme

Court Judge Michael D. Stallman systematically (and by the pattern of his Decisions) allowing this to go on?

Acting Supreme Court Judge Michael Stallman
Moreover, Russo and Burke have, for ‘good measure’, formed alliances with lawyer George Pavia and Pavia’s jail-bird pal Ted Kohl, and Burke's partner Kenneth V. Gomez, Esq. and others in what may be a scheme warranting RICO charges (Racketeer Influenced and Corrupt Organizations). These activities and relevant public files, etc. are being reviewed by our investigators, reporters and others----updates soon.
PS: Scamraiders’ founder, Jim comments, “Maybe Burke and his Clients tagged on to George Pavia’s ‘access ticket-to-ride the carousel in the Unified Court System’.”

Justice Michael D. Stallman gave a real estate broker named Andrew Nemeroff a shot at a windfall he did not deserve, according to an Appellate Division panel that reversed Stallman’s ruling and summarily dismissed the broker’s bid for a finder's fee for allegedly bringing the buyers into a real estate deal that netted the sellers a quick $15 million profit. Nemeroff made “numerous allegations” in his appellate brief about the supposedly crucial role he played in making the transaction happen, but “there is no evidence of record that supports plaintiff's position that the transaction would not have happened” without him, the appellate panel said. Moreover, in his deposition, Nemeroff admitted that under his agreement with the party he was suing for a cut of the deal, he would be entitled to a fee only if he successfully procured financing and the defendant closed on the property. That didn’t happen in this case. The defendant flipped the property without obtaining financing, depriving Nemeroff of any claim for a cut of the action. Nemeroff v. Coby Group (September 30)