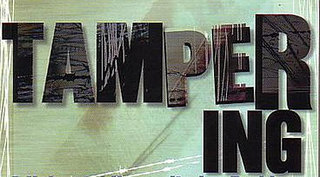 Caught tampering with court-reporter transcript where Wooten concocts a intentional sand-bag fraud orchestrated by a judge to defraud and deprive the rules of law.
Scamraiders has assembled sufficient proof and evidence to now state that JSC Wooten seems to be a rogue judge and a liar, charlatan, scallywag judge who has committed fraud on interstate phone lines, directly or indirectly altered a court-transcript of a supposed 'status conference' in the Jim Couri-John Siebert case on Sept. 1, 2010. Wooten has issued decisions regarding mandated compliance with a injunction -barring any motions by the parties including lawyer Joe Burke- before the proposed movant demands a conference call with the judge and discusses the request with all parties on the line so that the non-movant can object. Unless 'permission is granted' the motion is improper and must be dismisse- and if the movant failed to advise any judge of the injunction and if, by the fraud on the court, a motion made without compliance with the injunction is decided it is volitive of the law of the
case -the injunction- and any decision must be reversed, vacated and set aside.

Knowing the forgoing undaunted JSC Wooten allowed Burke/Siebert to make motions -in particular a motion to hold Jim in contempt for Scamraiders activities without the mandated compliance with the injunction. When Jim objected on the Sept. 1, 2010 status conference -Wooten embarked over interstate phone lines- on a systematic scheme of lies and deception geared to screw and rob Jim of his rights to due process by judicial fraud, collusion and corruption, intentionally and falsely claiming that the court tried repeatedly to call Jim and Jim did not respond. These lies/frauds went on for pages in the transcript except the transcript omits much of the dialogue between Wooten and Jim and Jim's opposition and questions targeting Wooten's documented lies and systematic deceptions. Wooten was simply caught in his cover-up and scheme and someone caused the altering of the court document. Scamraiders has the evidence of the alteration as it has the correct hearing transcript proving the tampering and forgery.

Further to this, although Wooten has decided and confirmed that the injunction must be followed and that all motions mandate permission or they are improper and must be dismissed and set aside, Wooten like the ostrich on the same Sept. 1, 2010 status conference then demands compliance by Jim of defendants Siebert/Burke flawed and illegal/barred motions made before JSC Stallman, seeking HIPAA forms and a 'hearing' regarding supposed (fabricated by Burke) California notary irregularities, a Burke/Siebert transparent knee-jerk scam Burke/Siebert allegation involving a drug abusing notary and Jim's own affidavits that were in support of motions that were improper for failure to get 'permission' pursuant to the injunction. After Jim caught Burke/Siebert conspiring with referee Jack Suter and JSC Stallman with ex parte collusion and writing fraudulent orders robbing Jim of his claims, where no permission was sought or granted and where Burke/Siebert engaged in fraud on the Stallman court and did not disclose the injunction. Yet the spiteful unified court ignores the crimes of Burke/Siebert/ Referee Suter and buys into Joe Burke's collusion of Jim forging on his own affidavits that are moot in any event -the corruption is disgusting, clear and convincing and contemptible- Wooten, with more deception and cherry picking condones rampant injunction violations by Siebert/Burke and forces Jim into complying with illegal barred decisions that were generated in violation of the injunction and that as a matter of law must be reversed and vacated. Wooten talks with a forked tongue as ALL motions and decisions made and/or decided in violation of the injunction are illegal, improper and must be dismissed, now Wooten demands compliance of Jim based on these illegal motions made by Siebert/Burke and Wooten has caused the tampering and forgery of a court transcript of the Sept. 1, 2010 status conference. Scammraiders will soon publish the flawed/forged transcript and the correct 'transcript' for all to read and compare. The forgoing only further confirms the collusion and corruption ongoing in the New York unified courts.

JUDGE WOOTEN, ALL MOTIONS/DECISIONS MADE WITHOUT COMPLYING WITH THE INJUNCTION ARE IMPROPER AND MUST BE REVERSED AND DISMISSED, THUS ALL DECISIONS GENERATED BY FRAUD ON THE COURT AND NON COMPLIANCE WITH THE INJUNCTION MUST LIKEWISE FALL. THUS YOUR HIPAA AND NOTARY SCAM FALL AS WELL. THE BURKE NOTARY CLAIM IS NOT ONLY A FARCE BUT MOOT AS ALL MOTIONS WERE MADE WITHOUT COMPLYING WITH THE INJUNCTION -JUDGE WOOTEN TAKE ACTION AS TO BURKE/ REFEREE SUTER EX PARTE FRAUDS, SIEBERT'S PERJURY AND THE SPOLIATION OF EVIDENCE- INCLUDING THE INTERSTATE FRAUD THAT THE COURT HAS TRIED TO SHROUD BY FRAUD AND COLLUSION.

THIS JUDGE IS ACTING LIKE A CORRUPT SCOUNDREL DEPRIVING JIM OF HIS HIPAA MEDICAL PRIVACY, MONEY AND IN THE PROCESS ALOWING BOGUS SIEBERT/BURKE COUNTERCLAIMS THAT WERE WAVED AND RELEASED BY SIEBERT AND HIS PC WITH THE ADVICE OF LAWYER THOMAS SPELLAINE, WHO SIEBERT LATER 'STIFFED' TO CONTINUE, KNOWING SUCH COUNTERCLAIMS ARE UNWARRANTED AND RELEASED. WOOTEN AS PART OF THE RAILROADING ABUSES THE RULES OF LAW AND ALLOWING THE CONTINUATION OF THESE COUNTERCLAIMS SOLY TO ROB AND EXTORT JIM. THESE CORRUPT ANTICS ALONG WITH IGNORING THE MANDATED RULES OF THE INJUNCTION AS THEY IMPACT SIEBERT/BURKE AND ALL OF THEIR ILLEGAL MOTIONS. WOOTEN HAS VIOLATED THE OATHS AND RULES OF JUDICIAL CONDUCT WITH IMPUNITY.

JUDGE WOOTEN IS A DISGRACE AND A SHADY JUDGE WHO HAS UNDERMINED THE JUSTICE SYSTEM, TAMPERED, COMMITED FRAUD INTERSTATE ALL TO PROTECT THE COURT'S AND SIEBERT/BURKE'S CORRUPTION, FRAUD AND COVER UP SEX-PERVERT DOCTOR SIEBERT AND HIS SMALL-TIME THIEVING LAWYER JOSEPH M. BURKE'S TAMPERING, FRAUD, PERJURY AND WORSE -SCAMRAIDERS HAS THE GOODS ON JUDGE WOOTEN- SEE SCAMRAIDERS OF PROOF OF WOOTEN'S TAMPERING, AND FORGERY OF A COURT TRANSCRIPT TO COVER UP WOOTEN'S ATTEMPTED THEFT OF THE RIGHTS OF A LITIGANT TO OBTAIN A ILLEGAL RESULT BY COLLUSION/CORRUPTION. JUDGE WOOTEN IT IS TIME FOR YOU TO RESIGN AND FACE THE MUSIC.

AS PART OF THE WOOTEN 'SOFT-SOAP' (ON SEPT 6, 2010 WOOTEN ISSUES ANOTHER TRANSPARENT 'SAND-BAG' ORDER FILED SEPT. 30, 2010) DEMANDING THAT JIM COMPLIES WITH THE FLAWED STALLMAN DECISION INVOLVING BARRED AND RELEASED DEFENDANT-COUNTERCLAIMS AND REGARDING HIPAA FORMS THAT WAS GENERATED BY CLUELESS STALLMAN, AS A RESULT OF BURKE/SIEBERT FRAUDS ON THE COURT WITH ANOTHER MOTION MADE WITHOUT BURKE/SIEBERT'S COMPLIANCE WITH THE INJUNCTION. THUS THE MOTION AND ANY DECISION FLOWING FROM THE VIOLATION OF THE INJUNCTION IS IMPROPER AND MUST BE REVERSED/VACATED. JUST AS ALL OTHER IMPROPER MOTIONS THAT VIOLATE THE INJUNCTION MUST BE VACATED. AGAIN JUDGE WOOTEN 'CHERRY-PICKING SEASON IS OVER, JUDGE WOOTEN IS CLEARLY SLOPPY AND INCOMPETENT, A BAD-EGG GUILTY OF PREJUDICE AND FRAUD, AS EVEN IF THE STALLMAN DECISION WAS NOT ILLEGAL/IMPROPER HIPAA RULES AND PRIVACY RIGHTS CAN NOT BE IGNORED AS HIPAA COMPLIANCE IS MANDATED BY FEDERAL AND CALIFORNIA STATE LAWS, JUDGE WOOTEN, JIM'S MEDICAL CONDITION IS WELL DOCUMENTED YET WOOTEN HIT-MAN BURIES THE LAW TO ROB JIM YET AGAIN AND HARASS AND EXTORT JIM IN THE PROCESS.

THE FIX IS IN AND WOOTEN IS THE 'HIT-MAN' BUT HE HAS BEEN CAUGHT LYING, CHEATING AND NOW TAMPERING OR CAUSING THE TAMPERING WITH A COURT RECORD AS THE OMISSIONS ARE TO FLAIGRANT, FREQUENT AND POINTED AT WOOTENS SCHEME Of CORRUPTION, LIES AND RAILROADING OF JIM, THUS IN SUM THIS TRANSCRIPT SCHEME/FORGERY AIN'T NO MISTAKE, IT IS WILLFUL. 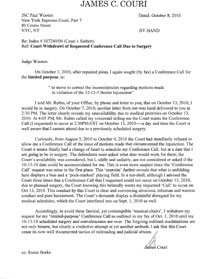 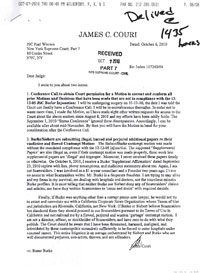