JSC Beeler of the unified court in NY in 2005 issued a injunction in Couri v Siebert case that mandates that all parties and Joseph M. Burke Esq must before commencing any motion, complaint, report etc involving the parties and Burke must call the court, seek a 'conference call' with the judge with all parties on the line and the court will determine after telephonic discussion, grant or reject the request based on the facts, condition, circumstances and the parties arguments over the phone. The court of course, must, pursuant to the injunction grant the immediacy to the 'conference-call'.
What JSC Wooten has done to deprive Jim of due process is to deny Jim's motions, not deny Siebert/Burke motions, all made without compliance with the injunction and when Jim sought the right to make motions to correct these improper unequal Siebert/ Burke and the Wooten court's violations of the injunction and Siebert/Burke frauds on the court for failing to seek the mandated 'permission' by conference call judge Wooten as part of the fix against Jim's rights, has made Jim a scapegoat, stone-walled Jim and refused to grant Jim any conference call for months. Thus, intentionally depriving Jim access to the courts and intentionally depriving Jim compliance with the injunction. Judge Wooten has himself deprived compliance with the very injunction he on the other hand seeks Jim's compliance, a scam of deception, bias and fraud by a supposed judge, what Wooten has done is demanded compliance of the injunction on Jims 'dime' and then refused to allow Jim to comply with the injunction by not granting a immediate conference call as the injunction demands. Wooten has by deception prejudice and abuse of his roll allowed Siebert/Burke to violate the injunction and deprived Jim from seeking access to the court to cause the deception and frauds to be rectified, thus causing Jim loss, injury and deprivation of his claims.
Wooten is a disgrace, plain and simple. Wooten has by malfeasance, bullying and his own violations of the injunction allowed illegal motions made by Siebert/Burke and illegal decisions flowing from the fraud on the court and acts of contempt by Siebert/Burke to be improperly sustained. JSC Wooten talks with a forked tongue, and whose illegal conduct has undermined the law of the case, the injunction and has covered up the charade and follies of these acts of bias and corruption. Judge Wooten, your hands are again caught in the cookie jar by your atrocious and contemptible acts of intentional ambushing and deceptions.
See Scamraiders for more details of JSC Paul Wooten and his acts of willful interstate frauds and outright lies and cherry-picking and illogical sloppy acts. 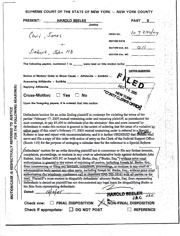