Judge Paul Wooten of the NYC Unified Court in New York further isolates himself like the ostrich with his head in the dirt believing that he is hiding from reality---guess again
Scams Inc./Scamraiders have been contacted by a number of litigants reporting numerous bad acts, lies and deceptive conduct spawned from the Wooten courtroom and his 'buffer-henchman' clerk Warren Rubio.

Yesterday our operations department received a phone call from Jim Couri who recently underwent major surgery. Jim reports that he spent the time writing a detailed letter to JSC Wooten regarding in part Wooten's misconduct and refusal to follow the rules of law---all carefully documented.

Jim caused the letter to be hand delivered directly to Wooten's courtroom where warren Rubio the court clerk refused to accept the letter.

Dismayed, Jim from California and hospital called Rubio who refused to accept the letter although Jim is self-represented and is seeking justice and fair play-----Rubio refused.

Open communications to courts are part of a judge’s obligation as a public servant but in the NY Unified Courts, these rights and justice, fair play and honor take a back seat to self-dealings, collusion, back room scams, bribes and corruption. Scaly JSC Wooten's unethical acts, lies and interstate frauds in concert with his 'ADC' Warren Rubio are well documented. And further confirmed by real evidence not to mention other litigants reporting their own 'horror-Wooten-reports'-----

Scams Inc/Scamraiders have received a copy of Jim Couri's letter and exhibits to it that Rubio/Wooten refused to receive. The letter is being delivered to the mail room of the NY Courthouse where Wooten is ensconced and is being published as it is a public document and record of Wooten's negligence, corruption and interstate frauds in a court proceeding.------------

We provide below a full copy of the letter and exhibits for all to see and for all to see how Wooten is riding roughshod over litigants he has chosen to railroad because of back room cronyism, deals and corruption. Wooten is not new to the FBI and his reported clandestine scams----

In this case Wooten, over interstate phone lines on Sept. 1, 2010 in a court proceeding, engaged in lies, fraud and intentional deception and then caused the 'supposed official court transcript' to be doctored to eliminate his frauds over interstate instrumentalities------

Wooten is by his own conduce established that he is a corrupt lying judge, covered by a lying and corrupt clerk Warren Rubio who does Wooten's dirty work---- as evidence does not lie--now this supposed judge isolates himself so he can perform and dispense more fraud, corruption and poison

Rubio refused, Wooten refused to take the calls and then on Sept. 1, 2010 Wooten lied, falsely claiming that the court called Jim and Jim refused to take of return the calls. -----Despicable---yes----but Jim has the proof of Rubio’s lies, and frauds and Wooten’s lies, frauds and worse and Wooten as a public servant must be held accountable for his self-indulgent crimes and corrupt acts impacting citizens and their lives-- 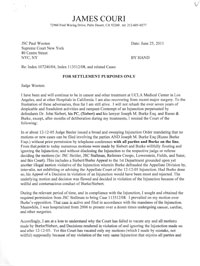 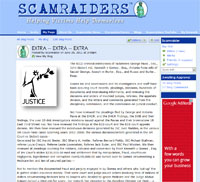 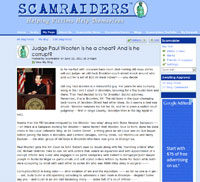