Gomez lies in this pending 2007 lawsuit in New York - index #108133/07, commenced against Gomez by Jim Couri, charging extortion, fraud, tax evasion, obstruction of justice and more against Kenneth Gomez and others affiliated with him i.e.: John Siebert, MD, Joe Burke, Esq. and Russo & Burke. JSC Karen Smith upheld Jim Couri's claims in her 2007 order/decision and refused to dismiss them. Gomez thereafter defaults by lying in his answer in direct contravention to Judge Smiths decision.

Please note that JSC Joan Madden did intervene to protect and insulate George Pavia and his documented criminal acts. Jim was required to amend his complaint in the case as to Gomez, who has, for over two years, failed to impose a answer and id in default.

Most significant, Gomez has as a matter of law admitted to all of Jim Couri's claims and causes of action against Gomez in the amended complaint. Please review the summons, complaint, JSC Karen Smith's decision/order, Jim Couri vs Kenneth Gomez, Esq amended complaint and the Gomez flawed answer in violation of the Smith order and in violation of New York civil practice laws and rules.

Gomez is in technical default and has, by virtue of his defaults/conduct, admitted to the causes of actions in the amended complaint filed by Jim against Gomez in 2007. As you can see, Gomez - like a rabid dog or drunk - can not stop his illegal reckless acts.

Making matters worse for Gomez is the fact that he failed to appear at two depositions demanded by Jim, further examples of Gomez's despicable and desperate sociopathic conduct. Here are the documentary facts; you decide as to the deceptions and extortion of Kenneth Gomez - a phony and a fraudster. 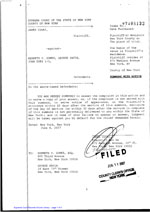 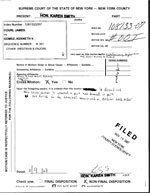