Kenneth V. Gomez Esq - who is this guy? 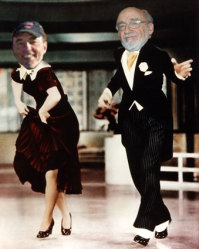 He is among other things, referred to as 'an asshole' by one of sex vulture Dr. John Siebert's 'gal-pals' And how come he is the only one man soap box ranting and spewing attacks about Scamraiders/Scams Inc and terminally ill Jim Couri?

Kenneth v Gomez Esq is a phony, extortionist, flim-flam lawyer/perjurer who can not shine the shoes of Jim Couri.

Cowards in living color and sociopaths - corkscrew George Pavia, pervert Dr. John Siebert and corrupt lawyer Joseph M. Burke - spinelessly hide behind their minion- puppet/thug Kenneth V. Gomez in order use this pimp, Gomez, to spew out and spread their bogus propaganda crusade and do their shake-down dirty work

Siebert is caught, disgraced and 'run-out' of NYC after multiple evictions, firings and regulatory findings that Siebert is a sex offender and pervert.

And George and Antonia Pavia have been caught as a perjurer, forger, fixer, tax dodger, thief and George as a self-confessed fascist sympathizer.

Gomez is desperate and he needs money, so Gomez is on his last gasp of extorting us and ill Jim Couri, engaging in corruption, meddling, malice, fraud, extortion and threats, trying to shroud his and his 'boys' Siebert, himself and Pavia's, disgrace, crimes and sex molestings of innocent victims who have reported Siebert and Gomez dastardly demented sex acts, by bad mouthing us who have uncovered these sociopaths illegal acts and sex crimes.

Kenneth v Gomez Esq, a small-time-penny-ante scallywag, occupies a part-time closet office in the office of Joseph M. Burke/Russo & Burke, Esqs., where he in part performs his shake-down pimping, extortion, and fraud - and abusive threats - by phone, email and fax.

And on information and belief Kenneth V. Gomez once-in a while also engages in his sex perversions, as reported by Ms. Rachel, including her reported sex acts that Gomez has engaged in, by phone and in person, at his closet office, possibly with sex offender John Siebert watching or participating. See Diane Kleiman affidavit.

So please, office cleaning staff at 600 3rd Avenue, where Gomez hangs his pants and jacket - be careful . . .

Gomez, Siebert and D. Strauss-Kahan - they all seem to be 'peas in a pod' as sworn to by their sex victims.

Further, Joseph M. Burke and Russo and Burke, Esqs. are known to be shake-down corrupt lawyers, recently accused in federal court of extortion and filing forged and fabricated documents by plaintiff Bella Yaniv. The scheme was to extort money from victim consumers and Ms. Yaniv through fraud and deception by misuse of us mails and phones and fax, etc.

Gomez and Burke have been a part of a major scam of courthouse fraud, perjury and obstructing justice since 2003, involving disgraced Dr. John Siebert, who confessed in agreements to owing Jim Couri over $20,000,000.00 in unconditional notes, guarantees and other obligations.

Gomez also has been a 'bag-man' for courthouse fixer, perjurer and mob front and confessed fascist George Pavia and his wife.

When Jim Couri uncovered the collusion violations of injunctions, tampering, perjury and ex-parte activities and Dr. Siebert's sex abuses, rapes and molesting of patients including narcotics abuse and when Jim uncovered the Pavias corrupting courts and covering up their forgery at the Dept of Buildings in NYC and finding by ECB courts that the Pavias are perjurers.

Gomez (bag man) was hired by Siebert, Burke and the Pavias to commence a extortion and threatening crusade to discredit Scamraiders and Jim Couri. Jim was diagnosed with Stage 4 cancer, yet Gomez, since the fall of 2009, continued to pound his one man drum of lies and concocted false stories about Jim and 40 year old false, manipulated and forged ancient garbage.

Then Gomez, reports decisions issued by JSC Madden – the very judge that the Pavias corrupted to rob the rent stabilization Jim secured on the Pavia building in NYC in the first place.

Kenneth V. Gomez is a proven and undenied perjurer and his background reveals a drug abuser, who has unsavory affiliations with crime figures, who has threatened, extorted, harassed many. We have interviewed many of Gomez targets, including numerous companies Gomez has spread his lies and poison to in a Pavia-Siebert-Burke paid for scam to cover up the sociopathic and criminal acts engaged in by Siebert, Pavia, Burke and the criminals they are affiliated.

Gomez is a male prostitute who will do and say anything for a 'pay-day'. The bum has no life, no home and no legit job. He is just like a 'street-walking' hooker performing sex acts for 'Johns' in the back seat of a car.

So what do we have here? About this soap-box ranter Kenneth v. Gomez Esq?

Gomez is a nobody, a pimp-extortonist, perjurer, forger and accused sex abuser.

Lawyer Kenneth Gomez, we have learned, and undenied, has no money, no office, no home and no legitimate clients except:

George and Antonia Pavia, as reported by one of their lawyers, Jay Itkowitz, would do anything to avoid rent stabilization . . . and they did.

The Pavias bought a court to avoid the law and use thug Kenneth V. Gomez as a thug / bag-man / extortionist to cover up the Pavias larceny and fronting for mob members, such as Ted Kohl, who is presently in prison for extortion, tax evasion and thefts.

Sadly, Kenneth V. Gomez, Esq, is a disgrace, a fraud and a swindler.

And Scamraiders will continue to investigate the continued illegal acts of Gomez, Pavia, Siebert, Burke and other of their cohorts.

Kenneth V. Gomez has been warned by internet companies, newspapers, lawyers and hospitals to cease and desist harassing them with unwanted untrue, abusive and false rampant emails bad-mouthing Scamraiders and Jim, but Gomez, who has little to lose, and who is being paid by pedophile/thief Dr. Siebert and mob-front facist Pavia, continues.

In sum, we have a pimp / extortionist lawyer, Kenneth V. Gomez, Esq., speaking for a sex rapist and a mob perjurer, bad mouthing Jim Couri, who has been a recipient of the Senatorial Medal of Freedom, who was businessman of the year for two years, who was on the Presidential and Congressional business counsels and who has been awarded many other accolades for federal tax reformation and for Jim's value to law enforcement.

Kenneth V. Gomez has been accused by one of sex vulture Dr. Siebert's 'gal-pals' of being an extortionist and of being an 'ass-hole.'

She further reports that Gomez masturbated in his pocket in the presence of Ms. Rachel and her roommates. She reports that Gomez also threatened her not to go-public about Siebert and Gomez sex perversions. Ms. Rachel tells Mr. Gomez that she will not be extorted by him or Siebert and she came forward to Scamraiders and further exposes 'ass-hole' Kenneth V. Gomez and pedophile, sex vulture and rapist Dr. John Siebert - all undenied.

Mr. Gomez, your rantings are nonsense and laughable. We are wondering why you are spending so much time and money on your band-wagon about Jim Couri and Scamraiders?

We are not holding our breath - but you are a proven 'joke' and 'ass-hole,' as reported by the woman you yourself threatened and extorted. Does Gomez deny Rachel's charges? Certainly not!!!!

By the way, Kenneth v Gomez has no provable background or 'CV' that can be found or reported, except Gomez does enjoy documented criminal associations as a 'bag-man' a front and a perjurer. And Gomez acts of extortion, harassment, threatening witnesses and Gomez sex abuses in concert with Dr. Siebert and lewd acts in front of ms Rachel and her roommates. And Gomez aiding the Pavias in tax evasion and thefts of the East 77th Street, NYC property of Janna Pierce and thefts of rent stabilization of 18 East 73rd street by corruption bribery perjury, forgery and corruption - all undenied and all documented.

A disgraced Dr. John Siebert, who has been evicted out of four medical offices and recently from 875 Park Avenue for defrauding the board of directors and illegal occupancy in the building . . .

Siebert has also been fired from four major NY hospitals for Siebert's proven acts of sex and narcotics misuse, abuses and crimes - also all well documented.

Meanwhile, Jim Couri is fighting Stage 4 cancer and has no interest in these pimps - Gomez, Siebert, Burke, Pavia - except to his being paid the money he is owed. Jim is not Scamraiders and is not Scamraiders' new owners, Scams Inc.

Have you no shame pimp-extortionist Kenneth Gomez? This is what Kenneth v Gomez is all about - stay tuned.