LAWMEN TO THE RESCUE!!! - Better late than never

Senate Judiciary Committee Chairman John L. Sampson, D-Brooklyn
Looks like a task force to investigate corruption in New York Courts maybe formed. It’s not soon enough, as fair judicial process in the Unified Court System has virtually ground to a halt. The generating by these Courts of legitimate, unbiased, fair, and truth-seeking rulings and decisions are about as hard to find as it is to locate a needle in a hayloft. Between unscrupulous lawyers desperate to win at any cost---including cheating, tampering and corruption; along with plenty of judges willing to go into the “deep water” to favor the favored, our Court System is a well documented disgrace. Sadly, the decent judges are being contaminated and adversely impacted by the overabundance of rotten-apples that appear to be manipulating our Courts to the detriment of legitimate citizens seeking fair and unbiased due process.

Senator Eric Adams, D-Brooklyn
Accolades to New York State Senator John L. Sampson (D-Brooklyn, NY) as reported in the New York Law Journal of 9-25-09. Senator Sampson’s efforts are the 21st Century baby-steps; a beginning journey in the effort to pry open the overcrowded “can of worms” revealing the incestuous corruption of crafty judges and complicit corrupt lawyers. Everyday the public is being skewered by judges who are compromised by special interests, favoritism, bribery, incompetence and crooked lawyers.

Significantly, a full scope task force cannot be the usual “putting the fox in to guard the henhouse”. It must be the “Real Deal”.

Scamraiders and its Founder Jim Couri (also from Brooklyn) intend to provide the Senators and any task force with names and a plethora of evidence material, exposing many of the violators of their oath of office and of public trust. Finally our Legislators are focusing on the gravely serious problems confronting New York Courts. Virtually daily our citizens are being willfully and systematically deprived in the Court System of their New York and United States Constitutional rights to due process because of judicial corruption and the complicit conduct of nefarious lawyers.

The Proverb says: “A walk of a thousand miles begins with one step”. Senator Sampson has had the presence of mind and courage to take that first step supported by the courageous assistance of New York State Senators, Rubin Diaz and Eric Adams. We congratulate all of them. 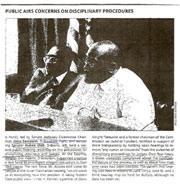 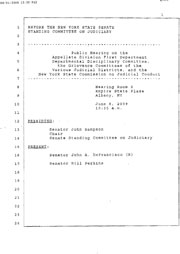