Scamraiders has evidence that Judge Paul Wooten has tampered with the court files in order to violate court rules, CPLR and force and cram down an illegal trial--------a scam of sandbagging by a corrupt bully lying judge-----

Wooten is also rabid to gag and deprive free press and free speech--------Scamraiders exposes of the Wooten soap-box-band wagon of lies, fraud and farcical back-room dealings with Madden, Siebert, Burke, Gomez and others----Wooten is the new-hit-man------

And Scamraiders has the proof of lying judge Paul Wooten’s illegal acts, attempted railroading’s in violation of injunctions, uniform rules and CPLR------to set up Jim and Scamraiders by perjury, fraud, collusion and criminal acts.

Wooten has engaged in a documented criminal scam, RICO violations and constitutional deprivations aided by admin. Judge Sherry Klein Heitler ---Wooten has violated the law, engaged in interstate fraud and extortion---screwed around with court files, secreted orders and violated injunctions, suborned fraud and perjury engaged in by disgraced Dr. Siebert and corrupt lawyer and bag-men Joseph M. Burke and Kenneth V. Gomez, Esqs.
Wooten has flouted and violated uniform rule 202.21 and CPLR 3404 in order to serve his corrupt and bribed interests and as part of a RICO scheme to rob $20million and in the process target Jim Couri and Scamraiders--------

Wooten is a fraud, a liar, a cheat and a corrupt and corrupted judge. He has exposed his dastardly agenda of a scheme to rob Jim Couri's claims against disgraced Dr. John Siebert who has been likewise exposed as a thief, a sex molester and a corrupt doctor. Siebert has been fired from 4 NYC hospitals for sex molesting patients, robbing healthcare insurers and for illegally dispensing narcotics.

Siebert has been evicted out of 4 medical offices and by Brown Harris Stevens from 875 Park Avenue as a 'squatter'.-

The unified court rules section 202.21 mandate that only after a bona fide note of issue is properly filed and filled out and served by and to parties to the case can a case be on the trial calendar-----before that a case cannot be marked trial ready------Wooten is his scam of railroading and collusion to ambush Jim and try and set Jim and Scamraiders up is caught again 'red-handed' tampering, engaging in fraud and corruption of circumventing court rules and CPLR3404--

CPLR 3404 mandates that when a case is removed from the trial calendar and not restored by motion by a party within one year it is abandoned and marked as such by the clerk without the necessity of any order.

Wooten in his desperation to retain Siebert's bogus, barred and released counterclaims -------illegally and in contravention to the unified court rules section 202.21 and in contravention to CPLR 3404---on his own secreted the Stallman October decision vacating the note of issue and after the statutory year had lapsed and the 'automatic dismissal’ triggered and made-----Wooten illegally and on his own in concert with part clerk Warren Rubio and his supposed 'law-secretary’ Ms. Sampson puts case 107240/04 on his trial calendar and schedules a trial for Sept. 8, 2011-------

These acts are corrupt and may be crimes. ------no case can be put on a trial calendar before a party executes a bona-fide note of issue and certificate of readiness and serves it on the other parties and files it with the clerk of the court with all required fees------no such filing has been made in case 107240/04 after JSC Stallman's vacature of the forged and illegal note of issue document-------

Judge Wooten has yet again taken the law and the rules of the Unified Courts in his hands-------engaging in fraud, corruption and intentional violations of the us and NY constitutions and circumventing the rules of the court system---------

Is this RICO? You better believe it and these corrupt acts by supposed judges are violations of federal statutes as well------

Judge Heitler what are you doing? ---It is time that you do your duties and stop hiding in the closet------you have all the documents--stop the cover-up now judge Heitler----or are you afraid of Wooten?

We exhibit a letter we have obtained that has been delivered to Wooten, Heitler and the chief clerks in the offices of trial support and motion/scroll support-------

We have been advised by court clerks that the forgoing is irregular, and that this case 107240/04 was in fact marked disposed/abandoned per CPLR3404 and failure to file any required note of issue and certificate of readiness---------

Wooten has proceeded to engage in fraud tampering, scheduling a trial in a case that was marked abandoned, and a case without any agreed-to note of issue--------

Further Wooten also knows that Jim is terminally ill cannot travel, is in California, and all confirmed by 10 doctors sworn-to affirmations--- 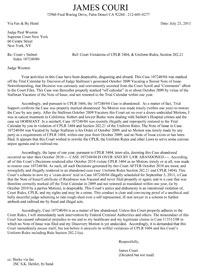