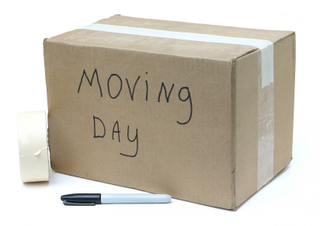 You could make a movie about this stuff. A happy family gears up for a new transition. Mom has a new job at an accounting firm across the country. Dad's landed a teaching
position. And the kids are a little sad to leave their friends, but
excited for the new opportunity. The parents have found a new
tree-lined street in their new town, thick verdant leaves shade the
neighborhood, families play on their lawns, joggers are up in the
morning. It's the place anyone would want to be. But then, everything
is turned upside down when a handful of villains embark on a
money-making scheme by taking a hostage. The hostage in this case? An
innocent family's stuff.

Of course the subsequent narrative threads - a mild-mannered father going vigilante against the villains, car chases, helicopters - that's all the stuff of
Hollywood. But the actual complaint is serious. And tragically not
uncommon.

The Better Business Bureau reports receiving more than 8,400 complaints against movers in 2009. And these numbers aren't going to diminish this year, in many ways they
may even trend upward. While most of these complaints tend to regard
damaged and lost goods, and even final charges well-over the original
estimate, still a great number of them involved the moving company's
"confiscation" of household belongings until an exorbitant
fee had been paid. These items would just sit on the truck, waiting
until several thousand dollars had been paid to the company to get
them out of hock. It's like kidnapping, in some ways, but it's your
sofa. It's sofa-napping.

The operation is pretty simple. The mover offers an estimate. It sounds legit, it makes sense, but once they get a hold of most of our hero's things, that's when they hit
with the real price. At what time the villain offers the ransom
amount? That's the variation on the theme. Act 1: The movers offer a
reasonable estimate. Arrive and start loading up. Halfway through,
once most of the items are on board, they drop the real price.

Act 2: After weeks and weeks of waiting at their new home and call after call to the moving company, the family is eventually told that "if they ever want to see
their furniture again, they'll have to pay even more money."
More fees may even be tacked on for things that wouldn't originally
have been considered: stairs, narrow streets, and the like.

Act 3: The "ransom" is paid, the furniture unloaded - most of it at least - and the villains make off with the money. It's not a Hollywood ending, but it's what
happens in most of these circumstances. It's hard to even get the
ransom money back because of limited government oversight.

So, how should our family have dealt with this? If packing up the house all on their own and loading a rental truck in the deep summer heat didn't sound appealing, nor
would it, it comes down to research. A little background information
is pretty much requisite when choosing to work with any company. Find
out if their have been any claims against the company to the FTC or
BBB - check all of their names, including any dba's. Know your rights
and responsibilities, a booklet from the FCMSA can be found here:

http://www.protectyourmove.gov/consumer/awareness/rights/rights.htm. By federal law, movers are required to give this information to clients. Ask for it.

Any mover that offers a rate without coming on site? Forget it. An estimate made on volume as opposed to weight? Don't sign. And speaking of signing, before you sign anything
make sure that you read all of the fine print. A binding quote will
often be binding as long as the total weight of your belongings do
not exceed the estimate. The scrutinizing eye of your estimator is a
lot to take on faith. And never, never, never sign a blank contract.
This should be evident, but it's happened. You want to make sure,
before you entrust everything you own to a third party, that
everything is spelled out clearly in black and white. Is this the
final price? Better be.

Despite the seeming simplicity of the scam, the laws surrounding it are byzantine. Consider that many moves are across state lines, moving oversight into a collaboration between
federal and state interests. Whole websites have been devoted to this
issue, delving into much more detail than this single article could.
More people move easily and simply than are ever bilked from
exorbitant additional fees, but that doesn't mean that it can't
happen.