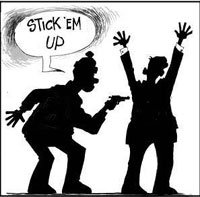 “George Pavia has engaged in corrupt acts and reckless influence into my affairs, causing me loss and damages,” said Jim Couri. “In fact, Pavia stole the rent-stabilized rights that I secured, in a building that he owned and also bilked my medical malpractice settlement through corrupt activities.”

Using Kenneth V Gomez, Esq. as a front man, Pavia, aided by law firm Russo & Burke, John Siebert and through the “manipulation” of the law and three or four New York Supreme Court judges, “Pavia and Company” have taken most or all of the $230,000 in cash, settled by Jim as compensation for misdiagnosed cancer.

Clever George somehow “hypnotized” these judges to ignore secured creditor rights, fraud and forgery. What did Gomez do with the cash paid to him? Who did he pay or pay off?

Where are his bank records? What is going on in the Unified Court System and what happened to justice and the law?

How many others has this guy Pavia performed his finagles & schemes upon and taken advantage of, including the tax man?