John Siebert
Muriel Karas, a New York Socialite discloses to our investigators that she fell victim to negligent and abusive actions of Doctor John Weston Siebert, a New York/Wisconsin plastic surgeon. Siebert is accused in papers filed in Supreme Court by Ms. Karas of negligence, falsification of medical records, personal injury, and malpractice, out of a breast surgery. On review of these and other Court papers filed in New York Supreme Court, Dr. John W. Siebert appears to be a defendant in over 20 other cases in New York Courts alone. 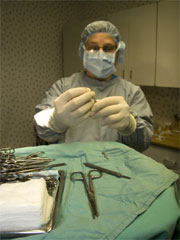 Thanks to some slick lawyering by insurance attorneys

Aaronson Rappaport Feinstein & Deutsch, LLP., Dr. Siebert got the Karas case dumped by Judge Abdus Salaam on the eve of her departure to greener pastures at the Appellate Division First Department in New York City. The matter is on Appeal. Ms. Karas is being interviewed by representatives of our Staff. The interview will be posted soon.