The example of the brazen audacity of Joseph Burke, Esq. is his willingness to defraud the court so that his rogue client, Siebert, can continue to rip off Jim Couri for the 20 million dollars he admittedly owes. Here are some of the examples, confirmed by documentary evidence
1) On June 8th, 2010, Burke, in support of a motion he made, grounded on fraud and deception, lies to the court, claiming Couri did not file a motion pursuant to article 31 of the CPLR amongst other things, and, for protection, under federal HIPAA laws and rules. That is an outright lie and the documents confirm that. In fact, Couri informed Burke that the court had erred in connection with federal HIPAA rules and was seeking full compliance pursuant to federal and state law. As part of Burke's fraud scheme, he manipulates words, facts and the law.

2) Burke claims Scamraiders belongs to Jim Couri. Scamraiders does not belong to Jim Couri, Jim Couri is a consultant and is not even a stockholder. There are other stockholders – not one of them is Mr. Couri. Mr. Burke, in his document, attempts to besmirch Jim Couri, while claiming that Jim Couri is, “communicating with third parties concerning the litigation” in violation of a supposed order of 2005. Such is laughable. Not only is Jim Couri NOT Scamraiders, but Mr. Burke, Dr. Siebert and their partner, Kenneth Gomez, Esq, who occupies an office in Burke's small shabby suite at 600 3rd Ave, NYC, has, at the behest of Burke and Siebert, engaged in Internet fraud, extortion, forgery, filing false documents, and concocting outright lies about Jim Couri. This is a direct violation of what Mr. Burke is speaking of. Meanwhile, Mr. Burke continues to lie and defraud the court by claiming Mr. Gomez has nothing to do with him. Gomez is a “wind-up pimp” who answers to Burke and Siebert.

3) Burke is desperate to cover-up John Siebert's sexual predatory activities, which are presently the subject of law enforcement investigations and investigations by the NY state dept of health for the termination of Siebert's license to practice medical and criminal prosecution, as we have now learned the facts. Siebert's termination from NYU Langone Medical Center was after extensive inquiry and hearings - presently Siebert's victims total more than 20. Burke claims “scurrilous defamations” about Dr. Siebert, which are in fact documented and detailed evidence of Dr. Siebert's sexual predatory acts and molestations of over 20 women/patients, reported by Scamraiders, not Jim Couri. Most interestingly, predator Siebert has failed to submit any affidavit in any pleading for about one year. We assume he's too busy molesting patients and providing them with contra-indicated narcotics (all of which, we have evidence of).

4) Last week, Jim Couri received numerous phone calls to his New York office, asking that Jim call a telephone number with a 608 area code (Wisconsin). It turns out that this number is Siebert's house in Wisconsin. Jim wrote Burke, concerning this and Burke/Gomez's phone calls and emails, which are documented, intentionally maligning Scamraiders and Jim to KESQ-TV, Elder Abuse, Google, YouTube and others. Mind you, all of these are documented by emails in our possession. To further prove Mr. Burke is a fraud and corrupt lawyer, is a letter Jim received on June 18th, Dated June 7th, stating “your claims are untrue, your voice mail claims are false, no calls were made to you and neither John Siebert, nor his wife, have any interest in speaking to you” We submit to Mr. Burke that John Siebert was interested in speaking to Jim when he was stealing his 20 million dollars. And, based upon the evidence we have in our possession, John Siebert does a lot of speaking about his wife to the women he has sexually assaulted, but apparently doesn't do much speaking to her.
Neither Dr. Siebert nor Joe Burke have denied the evidence of Siebert's sexual predatory acts and his discharge from NYU Medical Center. Rather, he attempts to make it appear to Judge Wooten that Siebert is a respectable doctor and that Joe Burke is an honest lawyer. If Judge Wooten really wants to know the facts, possibly he should take the time and communicate with the NY State Dept of Health at 90 Church St, New York City, investigator Abby Gordon, and then speak with the NY State Dept of Heath Legal Department in Albany. Also, if the court is interested, they can communicate with Ms. Lynn Lowy, (212) 404-4072, in-house council for NYU Langone Medical Center and Dr. McCarthy, chief plastic surgeon at NYU, to confirm Siebert's discharge for cause. Then, possibly, the court would like to know about Siebert's victims, and Scamraiders would be pleased, in camera, to provide the court with this information.

We at Scamraiders respect the law. We are a California-domiciled entity. Dr. Siebert and Joe Burke are making a mockery of your court. Possibly the court would put Dr. Siebert or Mr. Burke on the witness stand and ask them to deny the charges of Dr. Siebert's molestation of his patients. Scamraiders regrets having to inform a New York court about these criminal activities and perjury before Judge Wooten, but since Jim Couri is under medical treatment, we felt it important that we present these details to Judge Wooten and his Court.

In addition to the forgoing, we also with to post a recent letter Jim Couri sent to Judge Wooten, confirming that John Siebert and Joe Burke are despicable, ruthless liars concerning their harassment of Jim. Please take the time and read the letter, which as of the posting of this article, neither John Siebert or Joe Burke have denied or answered, and neither has Jim received any response from the court.

The following is a recent blog, courtesy Jim Couri Network, on this subject:

TRICKSTERS JOE BURKE ESQ & RUSSO & BURKE, ESQS ARE AT IT AGAIN IN DESPERATION TO COVER UP SIEBERT & THEIR CRIMINAL ACTS, TAMPERING & ATEMPTED COVER UP OF SIEBERT'S ILLEGAL SEX- MOLESTATIONS OF PATIENTS
LAWYERS RUSSO-BURKE & JOE BURKE ARE DOCUMENTED FRAUDS, EXTORTIONISTS & CORRUPT LAWYERS. WE HAVE EVIDENCE OF THEIR PERJURY, TAMPERINGS, HIDING EVIDENCE & COVERING UP SIEBERT & THEIR CRIMES----STAY TUNED TO NETWORK & SCAMRAIDERS----$10,000.00 REWARDS BRING OUT MUCH 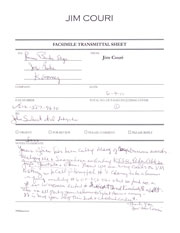 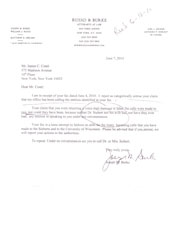 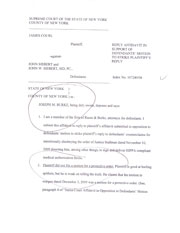 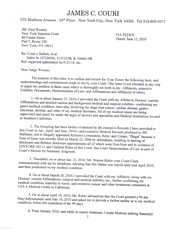