malpractice settlement to George Pavia Esq. and his stooge, Kenneth V. Gomez Esg., as a ‘Reward’ for Pavia-Gomez corruption, fraud and deception. How come this Judge choses to turn her back on well documented corruption and fraud, and properly filed, for over ten years, Financing Statements that encumber all of these settlement proceeds for the benefit of a Secured Party (Jim’s wife and her Trust)? What is going on in these Courts? What happened to the Rules of Law? Boss Tweed, Roy Cohn, Don Vito Corleone, where are you guys now? What’s behind these Black Robes in the Courthouse? Thus far, the Unified Courts in New York have curiously ignored evidence of forged documents, corruption and perjury-- apparently to allow, amongst other acts, George Pavia Esq., Kenneth V. Gomez Esq. and others in concert

It appears that a machine gun is no longer necessary to commit robbery, just find a Judge who is malleable enough and willing to ‘help’. If only Jesse James, John Dillinger,Willy Sutton, and Baby Face Nelson knew how to execute this method of ‘robbery’, their celebrated bank heists would have been a lot less “messy”. 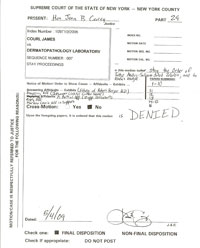