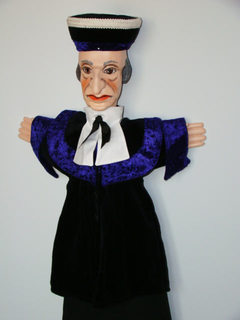 Puppet Judge Paul Wooten, by his corruption, is fumbling and orchestrating the setting up the charade-stage planning a sand-bagging and ambush by acts of fraud collusion, corruption, violations of injunction violations of the us constitution and violations of court uniform rules and the CPLR---all well documented---and documented judicial fraud- being manipulated by Joseph M. Burke Esq, George Pavia Esq, Kenneth V Gomez Esq and sex vulture Dr. John Siebert --Scamraiders has learned are and have been conspiring ex parte to impede Scamraiders rights pursuant to freedom of the press and freedom of speech and the U.S. Constitution

JSC Paul Wooten has exhibited a pattern of conduct that displays a blatant disregard for the law----Wooten has engaged------ and Scamraiders has evidence, documents, interviews, tape recordings and reports---------of Wooten's corruption and fixes and Wooten’s farcical acts of extortion, fraud in a court proceeding over interstate phone lines------

And of Wooten's transparent clear bias by his ignoring the well documented perjury and rampant violations by Siebert and burke of the Beeler injunction of 12-12-05. Wooten has lied, issued flim-flam inconstant decisions and has stated that a supposed Siebert motion signed by Wooten was made in compliance to the mandated of the injunction------

Wooten is a proved liar, tamperer, cheat and a doormat for those who bribe him in the back-rooms of the hallowed-halls of the NYC courthouse and in the crony bowels of Brooklyn------

Wooten's recent display of illegally placing case 107240/04 on the calendar without compliance with CPLR 3404 and uniform rule 202.21(a)-(f)
Is despicable-------Wooten in his lowlife manner has lied to clerks, hidden orders, and tampered with the case file-------these statements have been told to Scamraiders investigators who spoke to some clerks at trial support---and at motion support---------

Judge Wooten's reputation as a reprobate proceeds him------

Scamraiders has zero to do with Jim except we intend to as our mission reveals---expose corruption----etc. -------

Meanwhile we all know what is going on and so does the FBI and DOJ.

Judge Wooten the contempt motion made by burke and signed by you is another scam is illegal and violates the requirements of the injunction---------- and Jim Couri is not a part of Scamraiders reporting about the documented corruption that we report------freedom of speech is a great thing---it’s about time Wooten that you start reading and stop cheating-------many are on to you-----and your corrupt mistakes and evidence are piling up-------meanwhile the case is illegal, abandoned and no note of issue exists---and conspiring with burke to restore it in violation of uniform rules will more than prove your collusion and RICO crimes----------