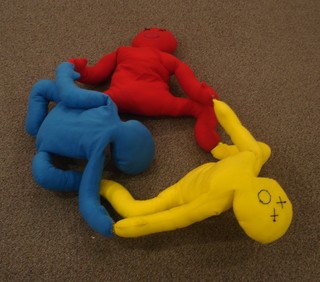 18 East 73rd Street
“If You Can’t Beat-em--Cheat-em” landlord/lawyer George Pavia and his wife Antonia Pavia pulled out all stops to rob Jim Couri and other tenants of Rent Stabilization Rights. We quote a published Pavia comment, “I will do anything to get Couri out of his apartment”. Jim had an apartment in a building owned by the Pavias, 18 East 73rd Street, New York City, in which Jim obtained Rent Stabilization---invoking the wrath of George Pavia and Antonia his wife.

Jay Itkowitz, Esq.
Scamraiders, reviewing the Court files, came across a Decision written by JSC Madden, dated January 30, 2007, Motion Sequence 31, in the Jim Couri - Pavia Case, Index #124625/02, see below. What makes this Decision of particular note is the biased attempt by JSC Madden to misuse and manipulate various Doctors and Jim’s very serious cardiac disease to the advantage of her ‘allies’ the Pavias and their then lawyer, Jay Itkowitz. Interestingly, Judge Madden makes a careful effort to point out that Jim-- “has ‘extensive’ litigation experience from the manner he has conducted the litigation”. This alone is very telling, except that no matter how good a card player is, he can’t beat a stacked deck, and cheaters. Madden also spends significant time ‘bad-mouthing’ Jim and depriving him of justice and fair play.

Dr. Jeffrey Moses
In June 2005, Jim collapsed in the Madden Courtroom at the Courthouse and was taken by EMS (ambulance) to NYU Medical Center. A stent was implemented at NYU, under the supervision of Dr. Howard Weintraub; however, the paper trail reveals that the stent resulted in further cardiac pain for Jim. Shortly thereafter, Jim was admitted to Columbia Presbyterian Hospital, where the stent implemented by NYU was found to be incorrectly inserted, and Jim received three new stents by Dr. Jeffery Moses, Chief of Invasive Cardiology at Columbia Presbyterian Hospital. Jim discharged Dr. Weintraub not only for medical negligence, but figured out Weintraub was conspiring with Dr. John W. Siebert, a previous business associate of Jim’s, who had actually introduced Jim to Dr. Weintraub. Siebert was desperate to avoid paying Jim money he agreed to pay. Jim then became a patient of the Invasive Cardiac team at Columbia Presbyterian, ie: Dr. Alexandra Lansky, and Dr. Jeffery Moses (the same World Class Medical Team who attended to President Bill Clinton.)

Dr. Howard Weintraub
Thereafter, Dr. Lansky provided no less than three Affirmations advising the Madden Court that any trial or adversarial issues could be fatal or at the very least gravely risky for Jim. These Doctor Affirmations were ignored by Judge Madden. Then Dr. Lansky attempted to phone JSC Madden at least four times, but Madden refused to speak with her. Dr. Lansky also offered to come to the Courthouse, which was ignored and then rejected by Madden. Rather, and most glaring, JSC Madden chose to “interview” Dr. Weintraub, who not only had been terminated by Jim for negligence, but as a pal of John Siebert was not serving Jim’s best interests both medically and otherwise. Further, Siebert and his lawyers, Joe Burke and Kenneth Gomez, had already formed an ‘alliance’ with the Pavias in a scheme to set Jim up, extort Jim, and steal his rights through Obstruction of Justice, collusion, tampering and corruption (now, all well-documented). See affirmations at the end of this article (click here).

Thus, JSC Joan Madden, in violation of her ethics and responsibilities, recruited a tainted, fired, and biased doctor, Howard Weintaub, to shore up, for the Pavias, a position that Jim’s health was a- okay to continue the Madden “Kangaroo Court” and set up. In fact Weintraub negligently provided stale, tainted and false medical data about Jim to Madden. Cleverly, Judge Madden also ignored all of Jim’s medical records produced from Columbia Presbyterian Hospital, refusing to view them or ‘admit’ them in evidence. Judge Madden’s Decision and conduct, carefully crafted her deception so that she could proceed to cram down a Hangman’s Trial for the benefit of the Pavias. Even more telling is the fact that Judge Madden precluded all of Jim’s medical issues, which thus disallowed any mention of Jim’s grave health issues to the Jury.

Pavia
Anyone can glean by reading the subject Order (see below) the Judge Madden set-up and agenda--- the finagle of Dr. Weintraub’s incompetent and stale, flawed ‘opinions’, and Madden’s secreting and standing silent on Jim’s legitimate and prominent Cardiologists and other Doctors’ Orders demanding of Madden that Jim refrain from a trial, etc. So, in violation of Jim’s Civil Rights, Judge Madden forced a trial where Madden’s penchant and pattern of hiding the truth from the Jury was evident in all areas. Including rewriting of relevant Laws and Codes to assist the Pavias in their unjust agenda, theft, and Obstruction of Justice. Judge Joan Madden was no less than a ‘wind-up puppet’ doing the Pavias’ ‘bidding’ to recapture for the Pavias Rent Stabilization through corruption and misuse of the Judicial process. There appears to be little doubt, based on the Madden Courtroom conduct, preclusion of legitimate proofs required by Jim, and a plethora of other bias and documented improper Rulings---

JSC Joan Madden should be ashamed of herself in view of her documented, transparent, and repeated violations of the law and of the Public Trust. It is sad that some people will do anything for money, and that people like George Pavia can become unjustly enriched by corruption, thefts and illegal acts. 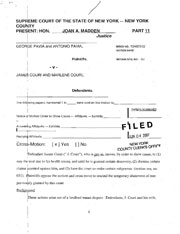