According to the Employee Relocation Council, moving is the third most stressful life event behind death and divorce. Packing up a lifetime’s worth of belongings can be an emotional rollercoaster. Trusting these items to a complete stranger comes with genuine risk. Sadly, there are those who are more than happy to happy to take advantage of their victim’s in these times of change. They are the con artists and scammers who are involved in the shady business of moving company scams.

It’s normal to have concerns when trusting your possessions to movers who you don’t know. Even after renting a truck and tempting a few brawny friends with pizza and beers as payment, you will still probably keep a close eye on your things and worry about them being mishandled and damaged, so dealing with strangers brings extra concern. There are two very distinct and common ways shady movers can scam a victim.

Beware of any moving company that demands a large up-front deposit before moving you, especially a request for cash. This fee will often be presented as an advance payment to confirm the requested time slot. They payment is made, but the movers never actually show up.

This can be catastrophic for an individual or family that is facing a deadline to be out of the old house. Everything is packed up but no one is there to move the belongings and the victim is in a mad scramble to get their possessions to their new home and out a large chunk of money to boot.

It seems simple, but this scam is surprisingly effective. Most often is perpetrated through companies that are found online or via posted fliers. After being contacted, they come out to the victim’s house, make an estimate and get their payment. No established business address or location has ever been visited or even confirmed. After collecting your money, they disappear and it isn’t easy to track these scammers back down. 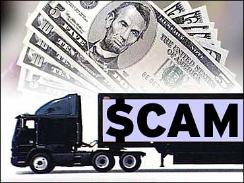 The moving company quotes a price and requests a small fee. They show up to the old home, load the boxes and furniture then drive off. When they show up on the new front doorstep, they ask for a credit card or certified check for twice the amount of the original quote. If the person balks, they simply drive off with the possessions and mail out an invoice for an even more inflated amount, often three or four times the original price agreed upon.

Although this scenario sounds unbelievable, it is surprisingly common. Steve Peeler and his family found this out the hard way, a story they shared with Tatiana Morales of CBS’ The Early Show.

The Peelers were moving cross-country, from Seattle, Washington to Jupiter, Florida. They were thrilled to be quoted $5,500, to move their belongings and both cars, by a company Steve found online, Let’s Move It Right. They got the quote in writing. 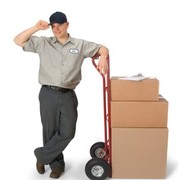 Over numerous discussions with the movers, they developed a friendly relationship and by the time moving day rolled around, the Peelers trusted the company completely. Big mistake. The day before the goods were set to be delivered, the Peelers’ received a phone call from Let’s Move It Right. The price had increased four times the original estimate. Steve Peeler refused to pay the newly requested $22,000.

The company did not deliver the Peeler’s belongings, but rather held the possessions hostage. Steve Peeler slept alone on an air mattress on the floor of their new home, his wife and children forced to stay with relatives. On Christmas Eve the company called Steve Peeler and threatened to auction off the Peeler’s goods if they did not pay.

The Better Business Bureau reports that since the moving industry was de-regulated in 1995 these types of complaints have doubled, but dealing with these rogue companies is a task most often left to the victims themselves.
The police normally won’t help in this situation. They consider it a civil or contract dispute. The only federally-provided assistance comes from the US Department of Transportation, but they have only a few investigators for the entire country and handle thousands of cases each year.

The Peelers finally got the moving company to release their belongings, seven long months after the initial delivery date, but required the assistance of an attorney to do so. They also sued Let’s Move It to Right and won $17,000 in damages. The company shut down before the Peelers collected even a single penny. Rest assured though, these crooks are probably pulling this same scam under a new corporate name.

If you are planning to use a moving company, pay attention to these following suggestions in order to protect yourself and your belongings:

– Use movers who have been recommended by family or friends. At the very least, check online message boards. Nothing is a better indicator than previous consumers’ experiences.

– Never trust an estimate that is provided strictly through telephone or online contact. The only truly accurate estimate requires the company to send a representative from your home and evaluate based on what you have. The sight-unseen estimates are always going to sound too good to be true, and as with most scams, they are.

– Beware low-ball estimates. There are plenty of scammers out there, so get at least three estimates. If one seems unbelievably low, they should be avoided.

– Investigate the potential company. Verify they have an actual place of business and warehouses and their own trucks. Look them up online to verify if they have a history of complaints, and if so, whether or not they have been resolved. Links to do so are provided at the end of this article.

– Be wary if they answer the phone with a generic, “Moving company” or “Movers”. More than likely you are dealing with a shady business.

– Get it all in writing. Many victims mistakenly sign blank contracts, a big no-no. Also, confirm any extra or hidden fees upfront. Moving companies will leave off the extra charges in their estimates. These can include fees for packing materials and padding or penalties for difficulty parking in narrow or crowded streets. Ask the company to clarify these additional payments.

– On moving day, if a rented van shows up instead of a company moving truck, this is a huge red flag. You should consider firing these movers immediately. Have a back-up plan or company ready to go, just in case this happens.

Moving is a huge strain on both your physical and mental well-being. There are scammers and con artists out there who would also like to put the hurt on your bank account. They aren’t afraid of lying to you and outright holding your possessions hostage in order to get what they want, your money. The risk is low for these crooks and the reward is high. So take the time to check out any potential movers. There are plenty of reputable companies out there who deserve the business, don’t fall for the ease and bogus promises of the scammers.

Check out movers and get other tips at:

A user-created website with great, detailed advice on moving and a blacklist of shady movers
http://www.movingscam.com/