Jud Morhouse and Nelson Rockefeller
What the heck is going on in NY? If the Aqueduct Racetrack “deal” according to the Daily News, stinks worse than the Aqueduct stables, then it may be that the court house stinks worse than a sewage plant. It sadly appears that New York required more than a general house cleaning. It probably needs a high-colonic enema.

It seems that what maybe going on at Aqueduct is Deja Vu as to what went on at the “Five Fingers” racetrack in the 1950's, involving L. Judson Morehouse, Bucky Mintz and famed Governor Nelson Rockefeller.

Sad as it was, poor Rockefeller could not believe that he surrounded himself not only with highly intellegent fellows, but for the most part, highly resourceful crooks. Scamraiders will be following up on the Aqueduct story, but for openers, we ask that you take a look at the links below. A 2/4/2010 Daily News article and as to Five Fingers, take a look at some excerpts below of Time Magazine articles regarding the infamous Five Fingers swindle and payoffs.

For the record, our founder, Jim Couri, has more than a fleeting knowledge of L. Judson Morehouse's activities. Particularly since Jim's father was an active business partner of Morhouse. See Scamraiders archives: http://www.scamraiders.com/profiles/blogs/scamraiders-revisits-more 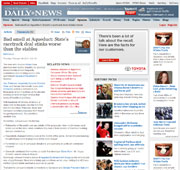