Money is tight for many these days, but one expense most are not able to live without is an automobile. Used cars are an acceptable cost-conscious solution and with the recession in full swing many Americans are turning down this avenue. According to a CNW Marketing Research study, nearly 4 million used cars were purchased in the month of May alone. That number was up 23% from April, and continued rising through the year. In contrast, new car sales were down 34% for that same period.

Purchasing a used car through the big dealerships often means a drastic reduction in the savings they used car buyers are hoping to achieve. This means delving into a world of used car-specific lots, classified newspaper or local magazine ads, and online listings. As with any journey into a world without major corporate presence, the chances of finding yourself face-to-face with a wily scammer are drastically increased.

Here are a few types of scams these con artists are currently pulling along with some ideas on how to avoid them:

ONLINE PURCHASING – This type of scam has existed for years. With our nation’s recent growth of dependence in online car shopping and the easy communication it provides, this racket has only grown in recent years.

An ad for a great deal on a used car pops up online. After a back-and-forth email conversation with the seller, the potential buyer learns that the car is actually located in another town or state. The seller then offers to drive the car down to the buyer, free of charge, if payment is made in advance (perhaps even just a percentage of the final agreement).

The victim wires money for the car and then waits for the new set of wheels to come rolling down the street on the agreed upon date. Of course, the day comes and goes and no new car arrives. There is also no reply from the seller who quickly vanishes. The car never existed, except for in the ad, and the potential buyer has lost whatever monies were sent in good faith.

Scamraiders wrote about a more recent version of this scam briefly in a previous article about Military-themed cons. Since it still seems to be on the rise, the facts bear repeating.

Many scammers are posing as soldiers or family of military members looking to sell cars quickly and cheaply before deployment to Iraq or Afghanistan. The con uses the same basic set-up as above, but with the extra addition of the patriotic plucking of our heartstrings.

The FBI issued an alert for similar “Patriot” act of fraud last year, after discovering a scheme in which a scammer posed as the father of a soldier killed in Iraq whose story had recently run in the local paper. Offering to sell an $80,000 book-valued BMW online for $2,800, the ad included pictures of the fallen soldier in uniform (scanned from the article in the paper) and the car which he supposedly owned, as well as an explanation for the price. Claiming to be the man’s father, the scammer said he was offering it at such a low price as a gift to his son’s memory and just wanted to find someone who would love and cherish the vehicle as his son had before leaving for the war.

If you are buying online, either through an advertisement, listing or auction site, remember this:

Stay local. This is the only way to make sure the car actually exists and it wouldn’t be a bad idea to take it for a test drive.

Call. Don’t rely on emails to do your business. This makes it way too easy for a potential con artist to disappear and never be heard from again and nearly impossible to track down.

Never wire money. There is no need to wire money for a car. Requests to do so, particularly before you have even seen the vehicle in question, are quite likely a scam.

Use CarFax. If shopping online get the vehicle identification number (VIN) from a copy of the car’s vehicle title and registration. Use to VIN to run a check and ensure its existence, location, accident and repair history. 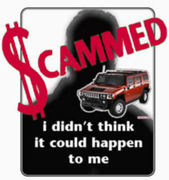 BUYING STOLEN CARS - Law enforcement officials have recently reported a new trend in VIN cloning which could lead to the purchase of a stolen car.

As mentioned above, the VIN, or vehicle registration number, is the unique number used to identify individual cars. As well as providing a history of the cars aches and pains, it is also a tool used by police in tracking a car down when its been stolen. Thieves are now cloning these numbers from other cars that are not stolen and using them to replace the original VIN on the dash of the stolen autos. They also recreate legitimate-looking fake title and registration documents featuring the new VIN. Then it’s only a matter of placing the ads online or in the local classified and waiting for a buyer.

When a CarFax report is requested, it comes back looking clean because it’s actually been run for the VIN of another car that has not been stolen. CarFax released numbers which stating that of the 1.5 million cars stolen every year, as many as 225,000 are subject to VIN cloning.

Here are some tips to avoid VIN cloned cars:

Use caution if offered a late model SUV or luxury car at significantly less than market price.

Don’t feel pressured if seller is pushing to close the deal quickly. Follow through.

Check the VIN number on the dashboard, inside the door jamb and under the hood against the provided VIN in the title and registration. Look for any discrepancies, often when faked; only the dashboard and title documents have been forged.

If you have any questions, obtain a comprehensive vehicle history report.

If you later think your car might have a cloned VIN, being mailed notices for unpaid parking tickets is a strong indicator according to the FBI, contact local law enforcement immediately.

ODOMETER FRAUD - By creating the illusion that a car has substantially lower mileage than it actually does, a seller can then charge thousands of more dollars than the used auto’s actual worth. Called “rolling back” or “spinning” the odometer, this practice normally takes 30,000 off the life of the car in question. According to AAA, the difference in savings when purchasing a car at 70,000 miles versus 40,000 miles is about $3,600. With about half a million used cars odometers being tampered with yearly, the cost comes out to about $4 billion in yearly losses for consumers according to the National Highway Traffic Safety Administration.

The scammers then get new titles for the vehicle from the DMV, while lying about the mileage. This “title washing” allows them to sell the cars with the rolled back odometers and have the paperwork backing up the fraud. To avoid detection, they are normally careful to roll back the numbers just far enough that they are not below the last recorded readings from the previous DMV registration.

Here are some red flags to look for regarding odometer fraud:

Before buying get the actual title and registration, as opposed to a copy. A brand new, or out-of-state, title might indicate “title washing”.

Missing screws around the dashboard, or strange scruffs and scrapes, could be a sign of a spun odometer.

Some electronic odometers will display an asterisk by the number if it has been changed.

If the odometer numbers are not lined up straight, it could be an indicator of fraud.

Inspect the car for service records, oil change stickers or inspection certificates. They can tell a truer story of the car’s history than a spun odometer, and scammers often miss these items.

Problems with the suspension, steering and engine are all signs of high mileage, as are brand new tires and emission problems. Have a trusted mechanic inspect the car and estimate the amount of wear and tear.

If it seems too good to be true, it probably is. Most folks aren’t giving away commodities as valuable as cars these days. If you are considering buying used, be sure to practice your due diligence and keep your eyes out for the scams as stated in this article. Good luck finding the perfect set of wheels and happy driving.

CarFax – to check on a potential used car purchase
http://www.carfax.com/